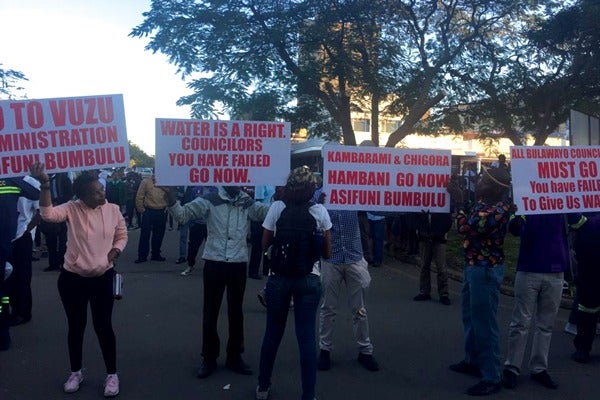 THE MDC leadership has summoned its Bulawayo councillors who last week faced protests from ratepayers over poor service delivery and endless infighting among city fathers.

The melee at City Hall, saw a clique of councillors led by deputy mayor Tinashe Kambarami suspending town clerk Christopher Dube on allegations of corruption and derelict of duty, among a cocktail of allegations.

The summoning of the councillors comes as a Bulawayo High Court Judge Thomson Mabhikwa was today set to deliver a judgement on MDC councillor and deputy mayor Kambarami’s eligibility for council office.

Protest movement 1893 Mthwakazi Restoration Movement Trust challenged Kambarami’s election on the grounds that he has a criminal record after he was convicted of stealing an extension code by a Bulawayo magistrate last year.

The Bulawayo council has been in the spotlight for all the wrong reasons, with chaos at the local authority culminating in the councillors’ attempt to suspend town clerk last week.

The “suspension” is linked to the battle for control of the second city’s tenders, land allocation and procurement processes.

“The councillors are coming to Harare for an internal process to resolve those issues, but as you might be aware we have managed to de-escalate the situation by saying let us return to the status quo. What it means is that the town clerk must come back to work pending further investigation,” Molokele said.

Hlatywayo said the party wanted to capacitate not only Bulawayo councilors, but its local government representatives, particularly on policy framework.

“It is not about summoning Bulawayo councillors; the issue is about making sure that our councils are well equipped in terms of capacity, in terms of ideas and policy framework. We are actually working with all councils,” Hlatywayo told Southern Eye.

Hlatywayo added: “We are doing that across the country, including Bulawayo. It is about a collective way of making sure that our councils work to the best interests of the residents, to deliver the party’s Smart policies to the people of Bulawayo, Harare and everywhere across the country. We are the governing (party) in local authorities and we are implementing those Smart policies…”

Smart is an acronym for the MDC’s sustainable and modernisation agenda for real transformation policy document unveiled ahead of last year’s elections.

Speaking at a press conference, chairperson Luba Masotsha said: “We strongly condemn all forms of tribalism. Bulawayo is a metropolitan city, which consists of many tribes. Our constitution or article 4:2 states that the MDC, in its composition and functioning, shall be inclusive, tolerant and against any forms of discrimination including racial, sexual and tribal discrimination.”