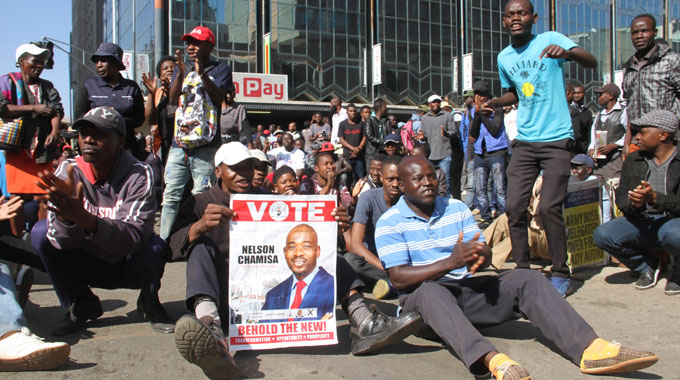 Twenty-six suspects who were arrested on Friday for participating in an illegal demonstration organised by the MDC Alliance were yesterday remanded in custody to tomorrow for bail application.

The gang of 25 men and one woman were arrested for various offences arising from the illegal demonstration which the police had earlier prohibited.

Initially 91 people were arrested, however, some were released after paying fines.

Zimbabwe Republic Police (ZRP) spokesperson, Assistant Commissioner Paul Nyathi could not ascertain the number of people who had been released.

“I am no longer in the office at the moment. I cannot ascertain the number of people who have been fined and those who have appeared in court,” he told The Sunday Mail last night.

“I will, however, be able to give you the figures tomorrow morning.”

Prosecutor Mr George Manokore requested that the accused be remanded in custody until tomorrow pending further investigations into the case.

“The state requests that the accused be remanded to 19 August pending further investigations on the matter,” he said.

The accused persons’ lawyer did not contest the date and said he would seek to challenge further remand of the accused or alternatively seek bail.

After hearing submissions from both parties, the magistrate rolled the matter to tomorrow.

The accused were arrested in Harare after the MDC-A organised demonstration was barred by police on Thursday in fear of the protest turning violent.

MDC-A the made an urgent High Court application seeking to challenge the police decision, but the bid hit a brick wall after Justice Joseph Musakwa dismissed it and upheld the prohibition.

MDC- Alliance activists, however, went on to gather at Africa Unity Square in defiance of the court ruling.

The police also say some of the youths went on to engage in confrontational acts which included threats, intimidation and disruption of the smooth flow of traffic in the Central Business District.

The police moved in and dispersed the unlawful gathering, arresting some of the suspects in the process. Others were arrested for various offences linked to the demonstration in Chitungwiza and Harare South.

In a statement the Ministry of Information, Publicity and Broadcasting Services said no one died during the demonstrations, while two people were injured