MDC-T on brink of another split 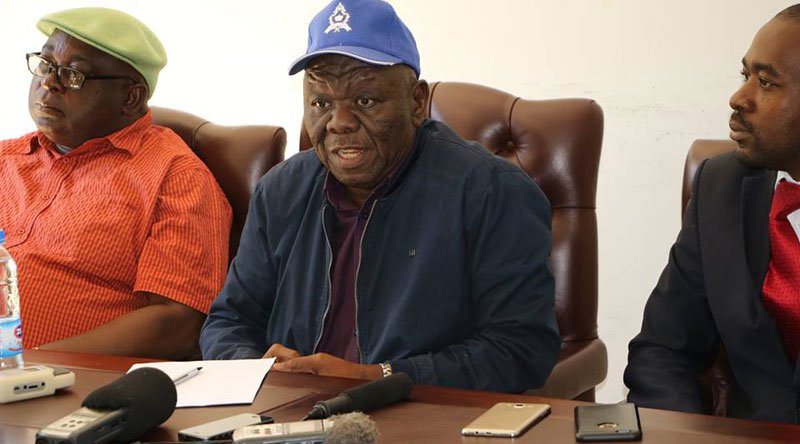 Source: MDC-T on brink of another split | Herald (Top Stories)

Zvamaida Murwira Senior Reporter—
MDC-T is on the brink of yet another split after senior party officials from Matabeleland — led by co-vice president Dr Thokozani Khupe — boycotted the party’s Standing Committee meeting chaired by acting president Engineer Elias Mudzuri in Harare yesterday. Dr Khupe is the only elected deputy to Mr Tsvangirai who picked Messrs Nelson Chamisa and Mudzuri to assist him in his duties in the wake of his affliction by cancer of the colon.

MDC-T national chairman Mr Lovemore Moyo also boycotted the high-level meeting, which reflected on the state of the party. The Herald is reliably informed that Dr Khupe and Mr Moyo boycotted yesterday’s meeting in protest over the decision by Mr Tsvangirai to appoint Eng Mudzuri as acting president. They argue that Dr Khupe was more senior to Eng Mudzuri, yet she was overlooked by Mr Tsvangirai.

Eng Mudzuri is currently MDC-T acting president, while Mr Tsvangirai is in South Africa for treatment. Mr Tsvangirai was diagnosed with cancer of the colon and has been in and out of hospital, a development that has seen him unable to effectively discharge his duties. This saw Mr Tsvangirai appointing Eng Mudzuri as acting MDC-T president.

He also appointed Adv Nelson Chamisa to represent him in the MDC-Alliance, a coalition of opposition parties formed to launch a united challenge in this year’s harmonised elections. A source in the party told The Herald that Dr Khupe and Mr Moyo did not attend yesterday’s meeting. “Our party is now on the brink of a split. It is now written all over and it’s there for everyone to see. Ms Khupe and Mr Moyo boycotted the meeting. In fact, our meeting today noted that Mr Moyo last attended meetings in May last year,” said a source.

MDC-T spokesperson Mr Obert Gutu issued a statement yesterday on deliberations of the meeting. He was silent on the absence of Dr Khupe and Mr Moyo. Mr Gutu, who according to sources belongs to a rival faction that is against Adv Chamisa’s ascendancy, repeated what his party has always said about the need to invite the United Nations to observe elections, among other issues.

When asked if Dr Khupe was present, Mr Gutu admitted that she did not attend. “VP Khupe, national chairperson Lovemore Moyo and national deputy chairperson Morgan Komichi could not attend the meeting because they had other engagements elsewhere,” said Mr Gutu. Dr Khupe, however, attended Parliament sitting yesterday in the afternoon well after the MDC-T standing committee meeting.

“That shows that an attempt to link her failure to attend party meeting to Parliament sittings as a lie from some spin doctors. VP Chamisa and acting president Mudzuri are both Members of Parliament and were on time for Parliament sitting,” said another source. “This clearly shows that there is more than what meets the eye. A storm is brewing and one does not require a rocket scientist to tell that the party is now headed for a split.” Jostling to succeed Mr Tsvangirai escalated in recent weeks after the opposition leader hinted that he was considering retiring from politics on health grounds.