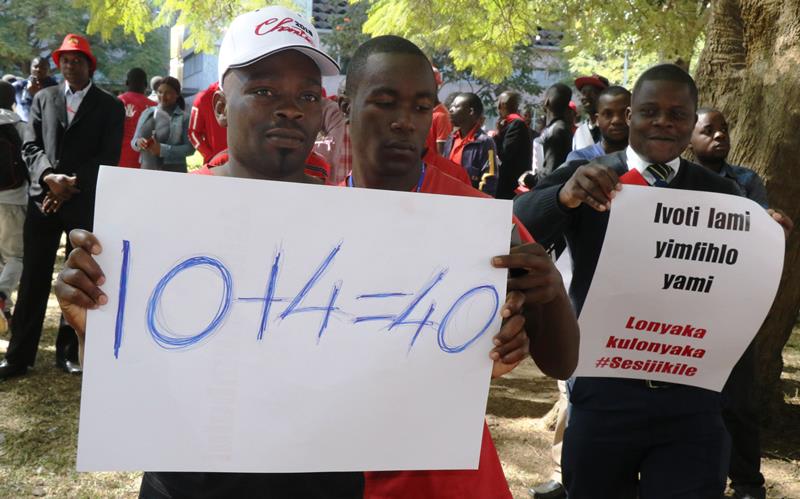 HARARE – MDC youth assembly is set to hold a series of demonstrations next week to protest worsening economic conditions in Zimbabwe.

In a statement, the youth assembly said the demonstrations will be held in protest of the back-to-school burden costs, high prices of commodities, a nonperforming and static economy as well as the fuel crisis. The youth assembly said considering President Emmerson Mnangagwa and his government’s “arrogant and ignorant approach” to the crisis facing the nation, it is important for national institutions and organisations to stand together “as they have not been spared by the wretched policies and leadership.”

“As the nation faces intense difficulty, uncertainty has engulfed our country. The illegitimate Zanu PF government has failed; disastrous leadership has become a serious threat to the people of Harare and Zimbabwe at large. The people’s revolution is ripe and we call every citizen to join, we are all affected by the current economic situation, no one should be left behind,” the statement said.

The youth league said the upcoming “revolution” will be joined by civil servants, the education sector, health sector, vendors, transport operators, students and members of the public at large.

The MDC youths blamed the crisis on Mnangagwa’s “illegitimacy”, suggesting that their leader, Nelson Chamisa had a national dialogue plan that would rescue Zimbabwe.

“The leadership vacuum at the helm of the country coupled with the illegitimate and clueless Mnangagwa has not helped the burning situation the country has found itself in. The people’s president, …Chamisa and the MDC party have come up with a five-point plan for a national dialogue that would help boost confidence in our political processes and in our economy. The five-point plan is people-centred and aimed at easing the economic hardships if implemented, however, the inept and irresponsible Mnangagwa government remains elusive,” the youth assembly said.

The statement also added that it was high time the country’s citizens embarked on non-routine rules and procedures to salvage the country that is on the brink of total collapse. This comes as the opposition youth league recently clashed with the police after resolving to conduct massive protests against government without first notifying the Zimbabwe Republic Police (ZRP).

Secretary-general of the MDC youth assembly Lovemore Chinoputsa told the Daily News that they will start rolling out the demonstrations.

“This year, we are not seeking police clearance because it’s our time to liberate ourselves. We cannot leave our liberation to a group of people that are captured and that also need to be liberated from the jaws of Zanu PF.