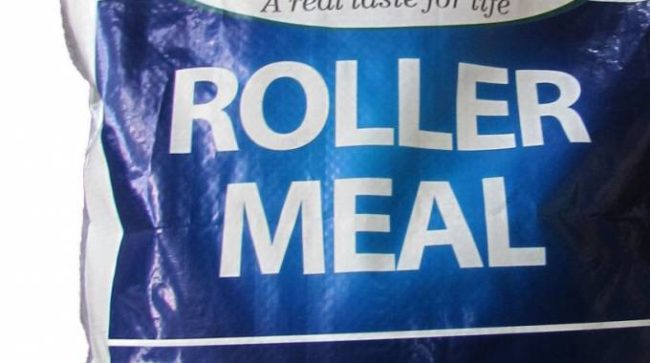 IN the run-up to this year’s edition of Valentine’s Day — touted internationally as a day set aside for lovers commemorated yesterday — a meme of a 10kg pack of Red Seal roller meal made the rounds on social media with the caption, “spoil your loved one this Valentine’s”.

Beyond the humour and sarcasm, the idea dovetailed into the current maize meal shortage in the country, which this week saw government increasing the subsidised price of the staple from $50 to $70.

This was after grain millers had complained that $50 was unsustainable amid indications that the shortage of the country’s staple on the market was artificial and meant to arm-twist the government into increasing the price.

Earlier this week, Grain Millers Association of Zimbabwe (GMAZ) chairperson Tafadzwa Musarara appealed to government to review the subsidies to improve viability of millers, while promising that the acute shortage of mealie-meal was set to ease, with trucks already on their way from South Africa with maize supplies.

Finance minister Mthuli Ncube, however, admitted that much of the subsidised mealie-meal was finding its way onto the parallel market, where it was fetching an average of $105 a 10kg bag.

“We are aware that there are people who sell 10kg roller meal at $105 or plus which is increasing panic among people,” he told Parliament on Thursday.

Despite the price-revision, analysts believe the shortage of the staple — real or artificial — was a serious indictment on Command Agriculture, a sector-specific government programme introduced in 2016 as an import substitution-led industrialisation concept to empower local producers of cereal crops and boost capacity for locals and create employment for thousands of people in the sector.

The idea was also to ensure huge savings in foreign currency as pressure to import food would be eased, with the limited financial resources channelled to other critical import essentials such as drugs.

Although the programme was embraced by thousands of farmers at the beginning, it only proved viable for one season, dimming hopes that maize production, which for years had plummeted owing to a variety of factors would improve.

Government, through Lands, Agriculture, Water, Climate and Rural Resettlement minster Perrance Shiri, entered into partnerships with Agribank, CBZ, Stanbic and Women’s banks to manage and disburse funds for the programme, which would be guaranteed by the government.

Indications, however, were that although the programme was noble, chances of it being reduced into a feeding trough for corrupt elements within the system were high as it was likely to accord the politically-connected cheap funding for their farming activities.

Following the launch of Command Agriculture, the GMB took delivery of a record 1,5 million tonnes of grain in the 2016/17 marketing season following a bumper harvest.

By September last year, farmers had delivered more over 1 million metric tonnes of maize to the GMB.

Social commentator Robert Mhishi believes if Command Agriculture had stuck to its noble objectives, there would have been an abundant supply of grain, which would have meant availability of mealie meal at very reasonable prices.

In August last year, the Finance ministry came under fire from the Public Accounts Parliamentary Committee over spending US$3,2 billion in six months under Command Agriculture between 2017 and 2018. Acting secretary in the ministry, Zvinechimwe Churu claimed before the Tendai Biti-led committee that the US$3,2 billion — which almost equalled the 2018 national budget amount of US$4,7 billion — was given to the Agriculture ministry for purposes of funding Command Agriculture.

However, the Agriculture secretary Ringson Chitsiko later denied before the same committee that he had received the US$3,2 billion on behalf of his ministry for the programme, leaving question marks over who received the money and how it was spent. Churu and Finance ministry accountant-general Daniel Muchemwa, however, later admitted that they had illegally spent the US$3,2 billion, and that Finance minister Mthuli Ncube will bring the over-expenditure sheet before Parliament for condonation. Such conduct, according to Mhishi, was a demonstration of the murky nature of the national programme that has “gone off the rails” as it can no longer meet its objectives of ensuring food security, particularly the availability of staple maize meal at reasonable prices.

“Quite clearly, our agricultural management is problematic. This is not just about mealie-meal, because this is just a microcosm of the bigger picture that needs to be addressed. There are too many pirates and chancers just out to get some money illegally out of agriculture because this is not a sound business investment,” he said.

“That explains why Command Agriculture was only successful in its first season. So, our image as the bread basket of southern Africa continues to be battered.”

Once reputed as the bread basket of southern Africa, Zimbabwe has in recent years struggled to ensure food security due to a raft of reasons including successive droughts and economic mismanagement.

According to an online report titled Agriculture in Southern Africa by Richard Dale, “the United Nations Food and Agriculture Year Book of 1975 ranked the then Rhodesia second in the world in terms of yields of maize, wheat, soya beans and ground nuts, and third for cotton. In the combined ranking for all these crops, Rhodesia ranked first in the world”.

In October 2018, Command Agriculture benefactor Kudakwashe Tagwirei splashed millions of scarce United States dollars on luxury vehicles for President Emmerson Mnangagwa and his deputies, Constantino Chiwenga and Kembo Mohadi, as well as their spouses and several other top government officials, which were brought into the country under the programme and were consequently exempted from paying duty.

The Command Agriculture programme, in its current state, appear to mirror Billy Rautenberg’s ambitious Green Fuel ethanol project, which is 11 cents more expensive than the ethanol being produced by Triangle Limited.

Nearly 10 years later, the project has not eased the expense and availability of cheaper fuel in the country despite the massive investment made.