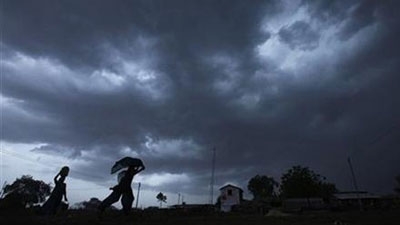 Cyclone Idai, which has reportedly killed 10 people in Mozambique is expected to hit the country this evening. In a statement, the Meteorological Services Department (MSD) has warned that the tropical cyclone which is currently moving at a speed of 5km per hour is expected to start moistening the country’s dry atmosphere beginning with the eastern highlands.

The cyclone has reportedly been drying out the bulk of Zimbabwe while at the same time inducing a steady cool breeze over the eastern parts of the country namely Manicaland, parts of Masvingo into Mashonaland east.

“If the present speed and trajectory is maintained; it is expected to start moistening the country’s atmosphere beginning with the eastern highlands on Thursday evening March 14. “However due to the nature of systems this path and speed can change drastically,” the statement revealed.

The MSD said it will continue to monitor intensity and trajectory of Idai and advise the public accordingly. Manicaland is tense as it is yet to fully recover from the infrastructural destruction that was caused by Cyclone Eline two decades ago with some washed out bridges still to be repaired.

Locals who were interviewed by the Daily News said they were praying for it to weaken before it gets to the province. “We are just praying that God will spare us this cyclone. We are at our weakest both economically and in terms of food security and the last thing we need is a cyclone,” Joseph Nachipo a local said.

Another Mutare resident Susan Gwara said the country was ill-equipped to handle the cyclone if it fails to weaken. “We are generally never ready for such natural events because very little information has so far been communicated to people who are at risk of suffering the greatest loss,” Gwara said.

In 2017, the country was also hit by cyclone Dineo which killed seven people and left about 130 000 more destitute in neighbouring Mozambique. Violent cyclone Dineo storms swept through southern Africa over two days bringing with them a deluge of rainfall and devastating flash floods in the three regions of Matabeleland, Manicaland and Masvingo.

Tsholotsho District in Matabeleland North was affected the most as some villagers in the Sphepha areas were forced to relocate.
In Bulawayo, the heavy downpour prevented many pupils from going to school, while the high density suburbs of Nkulumane, Emganwini and Cowdray Park reported major flash floods which damaged property.

In Manicaland’s Chimanimani District, torrential downpours also pounded the area, causing rivers to burst. In Chipinge, refugees at the low-lying Tongogara Camp had to be evacuated to higher ground on the same day amid fears that they would drown. .

In 2000, Manicaland experienced its worst floods in living memory when Cyclone Eline left a trail of destruction, including killing more than 136 people and damaging 59 184 houses and huts.