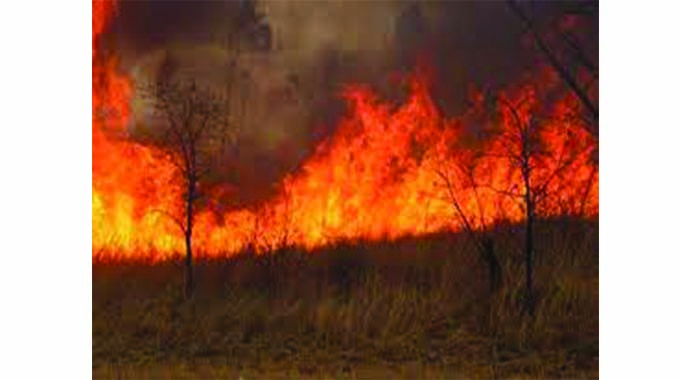 Patrick Chitumba, Midlands Bureau Chief
VELD fires in the Midlands province have destroyed more than 480 000 hectares in the past five years and have become one of the major challenges the province is facing.

The revelations come at a time when veld fires continue to threaten the sustainable management of natural resources thereby affecting critical economic enablers such as agriculture, wildlife and the forestry sector.

Cde Mavima said given the above normal rainfall experienced in the country during the 2020/21 rain season, there has been a significant growth of biomass in both natural ecosystems and croplands, thus the risk of veld fires is expected to be significantly high this year

He said it has been noted that land clearance for agricultural purposes, illegal gold exploration, negligent discarding of cigarette butts, smoking out bees, hunting, arson, improper ash disposal and unmonitored camp fires are among the major causes of run-away fires.

“Veld fires have in recent years not only caused the destruction of the environment and property, but have also sadly led to the loss of human lives in some instances. In addition, valuable crops, orchards, timber plantations and pastures have all been lost to veld fires,” he said.

“I encourage those districts and farmers who are yet to clear the fire guards to start now to avoid prosecution and imminent dangers associated with veld fires,” said Cde Mavima.

“A total 29 553 specially prepared thatch grass bundles have been harvested so far. Of these 27 000 were harvested by a group of women based in Ascot, Gweru. Thatch grass bundles are sold thus reaping financial gains in addition to biomass reduction,” said Minister Mavima.

He said the spread of veld fires is a serious threat to sustainable development and the attainment of the objectives of the National Development Strategy 1 (NDS1) with the potential to reverse the gains of the previous farming season.

Stakeholders must come forward and work hand in hand with the government in intensifying the implementation of national fire protection strategies,” he said.
Zimbabwe is in a high-risk category of 65,2 percent and an extreme risk category of 24,7 percent to veld fires due to

heavy rains received during the 2020/21 season.

Mashonaland West, Mashonaland East, Mashonaland Central and Manicaland are at extreme risk, while Matabeleland North, Matabeleland South, Midlands and Masvingo provinces are this year at high risk to the veld fires when they used to be in the low to medium risk, according to the Environmental Management Agency.