THE Grain Millers Association of Zimbabwe (GMAZ) has availed 40 000 tonnes of maize grain to the government for production of subsided roller meal to ease shortages that have forced residents to leave their homes during the 21-day national lockdown in search of the staple. 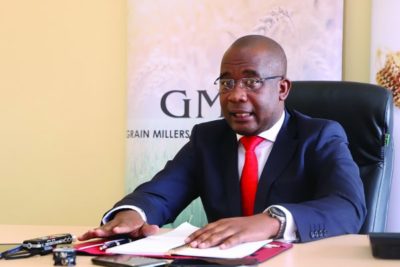 The programme, however, is being frustrated by government delays in paying the contracted millers as well as the unavailability of government-sourced maize.

If available, the shelf value of a 10kg packet of roller meal is $70.

Presenting on behalf of the milling sector at State House in Harare on Friday last week, GMAZ chairperson Tafadzwa Musarara said they had more than 40 000 imported maize stocks which they could give the government for roller meal production.

“On behalf of the milling sector, the stampeding of our citizens at the maize meal queues and promoting social distancing, we are offering, Your Excellency, 40 000 tonnes of maize that we have in the country now which we procured under the free funds arrangement. This maize was imported for non-essential production of other products such as snacks, breweries, stockfeed, and others,” Musarara said.

“We are offering that 40 000 tonnes of maize grain to the government to procure that so that we ease demand, which is currently at 2 000 tonnes a day. We believe that if the government is to accept this offer, we are going to reduce the queues and ensure that households which are locked down are properly and adequately provided for during this lockdown period.”

There have also been reports that some retailers were diverting the subsidised roller meal to the black market.

Musarara said they were closely monitoring leakages of the subsidised mealie-meal.

“On the overpricing issue, Your Excellency, your counterpart, (United States) President Donald Trump has read a riot act on overpricing in America and we are fully behind you on that one. The products that we produce, especially maize meal, we have a subsidy arrangement through our Industry and Commerce and the Finance ministry and we will work with them so that it is observed,” he said.

Musarara said his association had committed to feeding both the medical personnel attending to COVID-19 patients and the patients with food support going to Wilkins and Beatrice Infectious Diseases hospitals in Harare and Thorngroove in Bulawayo.