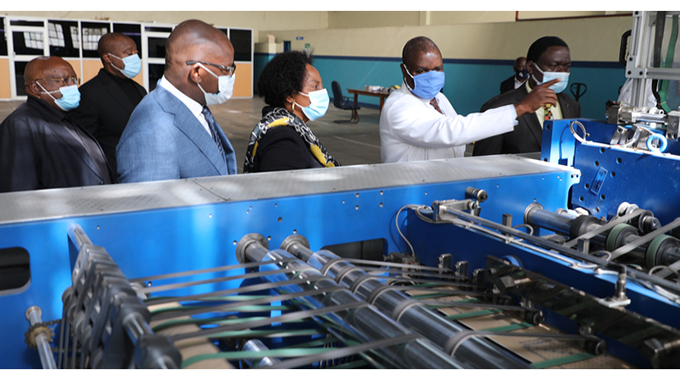 Under the Second Republic led by President Mnangagwa, Government has prioritised the revival of the economy and is presently implementing the National Development Strategy 1 (NDS1), which sets the tone for the achievement of Vision 2030.

Addressing Zimpapers staff after touring the group’s Bulawayo branch, Minister Mutsvangwa said as Zimbabwe’s biggest integrated and multi-media company, the firm should work in unison with the Government to rebuild the economy by communicating the devolution and development agenda.

“When I look at the Zimpapers’ business in this city (Bulawayo) and the province, I do so in the context of what is happening countrywide as we forge ahead with National Development Strategy 1. The Matabeleland, Midlands Masvingo provinces, which are your geographical area of news coverage in this part of the country are poised to play a pivotal role in the NDS1 programme. Exciting agricultural expansions is already taking place in all these provinces driven by increased agricultural reforms and programmes such as Pfumvudza/Intwasa,” she said.

Minister Mutsvangwa added that mechanisation and irrigation projects were all part of Government policies to reform the agricultural sector and enhance national food security through improved productivity.

“What this means is that Zimpapers needs to correctly position itself within these pillars and be ready to be the communication platform for this great revival of our economy.

“Just last weekend, I was in Hwange to witness a number of companies that are actually working on increasing the electricity requirements of this country. We are hardly getting 1 050MW when we need like 1 600MW so, it means the deficit there is being imported and the bill for importing is quite heavy on the country,” she said.

Minister Mutsvangwa said the Government has attracted investors that were already building thermal power plants and this would see the country producing over 5000MW by 2025.

This, she said, means that Zimbabwe will be self-sufficient in terms of electricity and be able to export excess power into the region.

While the Government was making efforts to rehabilitate and expand existing power plants through projects such as the US$1,5 billion Hwange Thermal Power Station expansion programme, Zimbabwe presently imports power from regional countries like South Africa.

Minister Mutsvangwa noted the invaluable role journalists play in communicating the devolution and development story hence the expectation for them to write extensively about infrastructure development and other programmes the Second Republic is undertaking to uplift the lives of people across the country.

During her visit to Zimpapers Bulawayo branch in October last year, she highlighted that her ministry together with the firm’s board and management, made it clear that they were working on improving the working conditions for staff and ensure resources needed for news gathering and distribution of content were availed. “I am happy to hear that performance of the Zimpapers products has improved since my last visit, with revenue generation going up. I am told advertising revenue has risen from 45 percent to 60 percent and that here in Bulawayo, the newspaper business is now contributing positively to the bottom line.

“Newspapers are now being distributed in more places in Matabeleland (North and South), Midlands and Masvingo provinces. I would like to see you continue to re-open some of those routes that you had closed so as to reach more people with the crucial message you carry,” she said. “I am happy that you have been able to keep paying the workers on time and that you pay way above the National Employment Council rates. This is exactly how it should be since you are the market leader and employer of choice in the media and printing industries.”

She challenged Zimpapers board and management to reinvest profits into the business while also giving attention to the welfare of the workers.

In the last decade Zimpapers has transformed from being a newspaper and printing business into an integrated multimedia house with newspapers, radio, digital and television products.

“From the briefing you (board and management) have given me, I am also happy to hear that, measures have been taken since my last visit to equip the newsrooms.

“There are brand new vehicles for news gathering and newspaper delivery.

“Laptops and smartphones are also being acquired to allow teams to gather news on the go and disseminate it in real time in line with the fast-changing trends of consumers of content in this highly digitalised era,” said Minister Mutsvangwa.

Earlier in his address, Mr Sithole said they were making frantic efforts to ensure they appreciate the workers for their commitment and dedication to serving the entity.

“This company through its CEO (chief executive officer) and his colleagues are doing their best with the support of the board to make sure that first and foremost we appreciate the people who work for this company, this massive human resource that we have at our disposal,” he said.