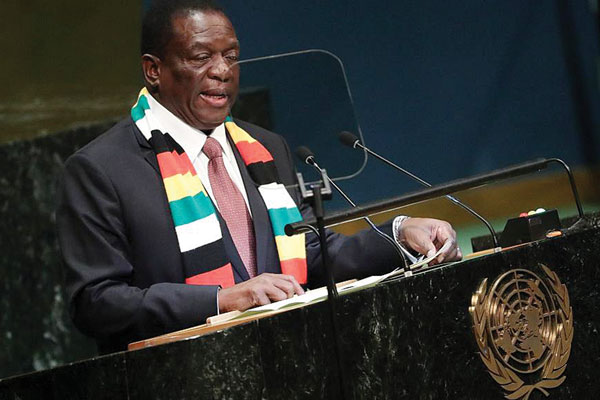 This came as President Emmerson Mnangagwa yesterday warned that the government would swoop on cash barons, economic saboteurs and those suspected to be behind other illicit deals in the country.

Speaking after being installed as the new Bindura University of Science Education chancellor yesterday, Mnangagwa said there were individuals behind the parallel market and manipulating the economy to cause artificial shortages.

“The net is closing in on the gluttonous individuals and government will soon name, shame and bring them to book,” he said.

As of yesterday, the United States dollar-bond note exchange rates on the parallel market were hovering around 350% for real time gross settlement transfers, although most dealers were operating in hiding and only handling transactions with their known clients.

According to police sources, search warrants were obtained against the senior Zanu PF officials, among them two former Cabinet ministers and a legislator and prominent businessman.

Police insiders said the search warrants were obtained on Thursday afternoon before Harare provincial magistrate Elisha Singano and were due to be executed “anytime”.

“Some Zanu PF officials are suspected to be funding these money changers. The raids include companies linked to them, all financial transactions and searching premises of their companies and places of residence,” a source said.

The MP last night said he was not aware of any search warrant against him.

“I don’t deal in forex, I deal in land,” the businessman said.

Another former minister also said his hands were clean while expressing ignorance of the existence of a search warrant.

“I am also looking for cash (just like everyone else),” he said

Another ex-minister’s phone was not reachable yesterday.

Also targeted were foreigners owning businesses, but were not banking cash as required by law.

These businesses, according to the sources, were reportedly mopping out the US dollar for externalisation.

NewsDay Weekender heard that some banks and senior figures at the Reserve Bank of Zimbabwe (RBZ) were also suspected to be abetting and fanning the US dollar black market activities.

The Zimbabwe Anti-Corruption Commission head of investigation, Goodson Nguni, said the anti-graft body was not involved in the operation, suggesting that it was either the police or the special anti-corruption unit in the President’s Office.

“Check with the police or that special unit headed by Thabani Mpofu, they could be the one carrying out the operation,” Nguni said.

Mpofu said he was unaware of the search warrants, but referred all questions to the acting Prosecutor-General Kumbirai Hodzi.

“I don’t know anything, maybe talk to the acting PG. He might assist. I have no clue on what you are asking,” Mpofu said.

Hodzi was said to be in a meeting by an aide who picked up the call and promised the acting AG would return calls when free.

He had not done so by the time of going to print, as his mobile phone was also no longer being answered.

Finance minister Mthuli Ncube told State broadcaster on Thursday night that authorities were closing in on money changers, who have been accused of fuelling price hikes and creating artificial shortages in the market.

Ncube said he was not aware that some senior Zanu PF officials were involved in illicit deals, but warned action would be taken against those trading on the parallel money market.

“I don’t know who is involved, but what we know for certain is that someone is fuelling these illicit deals and authorities are attending to that,” Ncube said as he exonerated the central bank from the activities.

Mnangagwa last week said he was now treating money changers as a security threat, as they were wreaking havoc in the economy.

“A great threat to our bid to stimulate productive activity in the economy comes by way of non-productive, speculative activities operating below the radar, but involving millions in precious foreign currency and bond notes,” Mnangagwa wrote in a weekly State paper.

“These nefarious activities thrive on different electronic platforms. New measures will be pursued to stop such malpractices.”