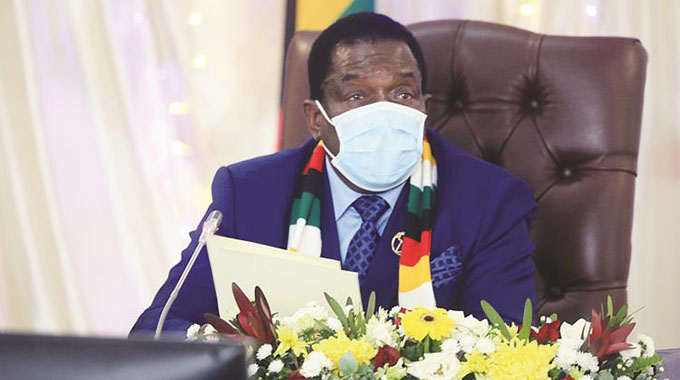 Cabinet ministers must before the end of March, draw up five-year action plans aligned to the National Development Strategy 1 (NDS1), for consideration by Government with the offices of the Vice Presidents continuing to monitor ministries clustered under their mandates.

President Mnangagwa told the first Cabinet meeting of the year at State House yesterday that ministers must incorporate monitoring and evaluation mechanisms in the implementation of their policies and programmes to increase their accountability and ensure efficient service delivery.

The meeting was held in line with Covid-19 social distancing guidelines and was preceded by a minute of silence in memory of three Government ministers who died from Covid-19 this year. The late Foreign Affairs and International Trade Minister Dr Sibusiso Moyo and the late Transport and Infrastructure Development Minister Dr Joel Biggie Matiza as well as Manicaland Provincial Affairs and Devolution Minister Dr Ellen Gwaradzimba died of Covid-19 related complications.

President Mnangagwa said this year would see the start of the implementation of NDS1, launched late last year to run for the next five years.

This year’s budget was already aligned to the implementation of the first year of the NDS1, so the pressure was on to ensure the set targets were met.

“Just last week, my office distributed the monitoring and evaluation policy guidelines for your use during the implementation of NDS1. It is critical to mainstream monitoring and evaluation in our policies and programmes to ensue efficient and effective service delivery, make informed decisions and enhance accountability,” President Mnangagwa said.

The reports would be considered by the ministerial committee chaired by the Finance Ministry and would be supported by the e-enabled Whole of Government Performance Management System to produce periodic and on-demand performance data for informed decision-making as the year progresses.

The President said his office was open to support and provide guidance for all ministries for the attainment of Vision 2030.

“Cabinet will anchor its business on ensuring food security, infrastructure development and industrialisation as we strive for a world-class economy and society which enjoys peace within our borders and with our neighbours and international community at large,” President Mnangagwa said.

This year’s reports to Cabinet would be based on the ministerial plans as captured in the national and sectoral frameworks and he warned against the ad hoc presentation of issues without adequate consultations at appropriate forums, which, in the past, has led to undesirable policy reversals.

“As much as possible, the use of local resources in project implementation will be prioritised. We remain hopeful that the good rainfall season we are experiencing will provide the much needed impetus to our development efforts and avert the need for importation of staple grain,” President Mnangagwa said.

On Covid-19, the President said the return to level 4 lockdown was meant to reverse the spike in infections and deaths due to the virus.

Efforts to procure adequate supplies of vaccines were being put in place and the President thanked the Chinese government for donating 200 000 doses of vaccines. He also thanked Russia’s President Vladimir Putin for also donating the Sputnik Victory vaccine.

The President said all Cabinet ministers, their aides and drivers as well as staff entering the Cabinet venue, would be tested regularly for Covid-19.

Mechanisms were being put in place to ensure Cabinet members attended meetings virtually from their offices.