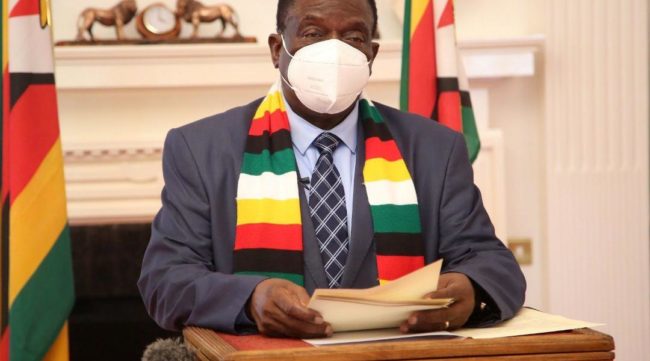 PRESIDENT Emmerson Mnangagwa yesterday further extended the lockdown by another two weeks with government saying it was not clear on the efficacy of the Sinopharm COVID-19 vaccine received from China to contain the disease.

In his address to the nation on the new COVID-19 lockdown measures, Mnangagwa revealed that government would soon receive a vaccine sourced under the COVAX facility from the United Kingdom (UK) in what observers said was a U-turn after government officials had earlier on accused the UK of arm-twisting Harare to accept the vaccine offer.

The United Kingdom, through its ambassador to Zimbabwe Melanie Robinson, last year offered to vaccinate 20% of Zimbabwe’s population against the coronavirus for free.

But the government indicated recently that it did not accept the offer extended to Vice-President and Health and Child Care minister Constantino Chiwenga as the offer was “vacuous” and “conditional.”

In his statement yesterday, Mnangagwa said the country was set to receive the UK vaccine together in addition to other vaccines from China, India and Russia to contain the highly infectious respiratory disease which has claimed

“Vaccines from other countries namely Russia, India and the United Kingdom are also on the way,” Mnangagwa said.

“That should see our pace of vaccinating willing Zimbabweans increase in tempo, thus drawing us nearer the goal of achieving herd immunity,” he said.

The British embassy in Harare could not immediately confirm what had changed for Zimbabwe to accept its vaccine, which was initially declined.

Last week, a British embassy spokesperson said they would not force the Zimbabwean government to take the vaccine under COVAX, which is a global coalition led by the World Health Organisation (WHO), GAVI and CEPI which extended 1,3 billion doses to the 92 poorest countries in the world.

Meanwhile, in his statement on the new COVID-19 lockdown measures, Mnangagwa said the level 4 lockdown period that began on January 5 this year  and was initially extended to last night, had helped contain the number of deaths and infections that were spiralling out of control.

Statistics from the Health and Child Care ministry revealed that as of last night, the country had recorded 35 222 cumulative cases of COVID-19, 50 new cases, and two deaths, as well as 30 759 recoveries, an improvement from the figures recorded before the lockdown in January which had soared to 60 deaths per day.

“Since the implementation of the current lockdown which ends midnight today, we have witnessed a marked decrease in the number of COVID-19 infections,” Mnangagwa said.

He said the curfew would now run from 8pm to 5:30am, while business hours start from 8am to 5pm.

On intercity and interprovincial travelling, Mnangagwa said they still remained banned, while funeral gatherings will remained pegged at a maximum of 30 people.

“All social gatherings remain banned and all burials are to be held according WHO protocols and regulations,” he said.

The President said private companies wishing to operate would test their workers as mandated by (World Health Organisation) guidelines, while the Judiciary would only attend to urgent cases, and no one would be allowed in the gallery.

“Schools will remain closed for the duration of this extension.”

Mnangagwa later posted on Twitter stating: “It is with deep sadness that I today announced that lockdown in Zimbabwe has been extended for two more weeks. I know that this will be painful for many Zimbabweans and this decision was not taken without great deliberation. But there is a light at the end of this tunnel.”

He said the second consignment of the vaccine procured from China would be received in a few weeks’ time, adding that the rollout programme would be announced by Chiwenga.

Meanwhile, government said it would be testing the efficacy of the vaccine while the inoculation process is in progress.

According Health ministry acting permanent secretary, Robert Mudyiradima, who is in charge of the vaccination programme, the government was hoping to vaccinate between 60%-80% of the population by year-end.

“We have to vaccinate as many people as possible within the shortest possible time so that we can then protect them. We hope by the end of the year we should have vaccinated 60%-80% of the population. We will be doing some tests as we use it to collect that data to see the effectiveness against that variant,” he said.

Apart from rolling out the COVID-19 vaccine to targeted groups, government has also kept its land borders closed as part of measures to keep the disease on check.

Sadc secretary-general Stergomena Lawrence Tax yesterday hailed the move, saying: “Under the prevailing environment of #COVID-19, reopening of borders and economies in the Tripartite of Comesa-EAC-Sadc, needs to be done under a harmonised framework in line with set national, regional and international protocols on #COVID-19.”