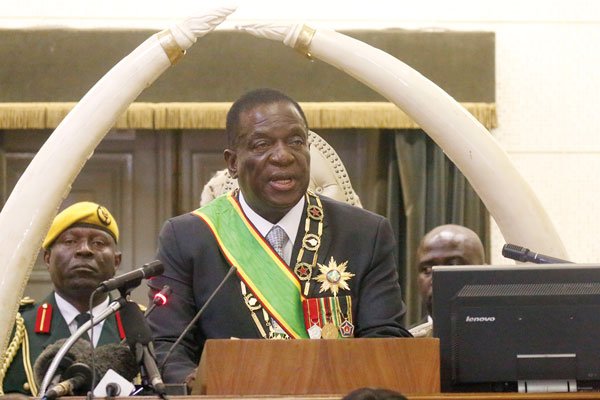 PRESIDENT Emmerson Mnangagwa has invited all opposition political parties who took part in last year’s general elections to a crunch meeting tomorrow to “discuss the framework for post-election dialogue”, as pressure piles on him to engage his political nemesis for a lasting solution to the country’s economic and political crises.

The Zanu PF leader, whose election victory has been disputed by the main opposition MDC leader Nelson Chamisa, leading to the current political logjam, had previously taken a hardline stance, refusing to engage the youthful opposition leader and demanding that the latter recognises his legitimacy first.

The country has remained on the edge since last year’s disputed presidential election, with State security agents ruthlessly crushing anti-government protests organised by the opposition and civic groups.

The invitation letters, dated February 5 and signed by Chief Secretary in the Office of the President and Cabinet Misheck Sibanda, were sent to all political parties which participated in the July 30, 2018 harmonised elections.

Chamisa’s party confirmed yesterday that it had received the invite.

“The party will discuss and issue an official statement on that in due course. To my knowledge, the invitation has been received,” MDC deputy spokesperson Bekithemba Mpofu said.

The meeting is scheduled to take place at government’s New Munhumutapa building.

“The President, Cde ED Mnangagwa, is inviting leaders of political parties who participated in the presidential election of July 30, 2018 to a meeting to discuss a framework for dialogue and interaction,” part of the letter read.

“Each presidential candidate is expected to bring three delegates and for those candidates with parliamentary representation, one extra delegate can be from Parliament.”

The clergy, under the Zimbabwe Council of Churches (ZCC), recently offered to broker the talks for dialogue involving the country’s leading political parties.

The United Nations (UN) recently said it was closely monitoring Zimbabwe’s volatile situation, and separately engaging government and other stakeholders to find a lasting resolution to the crisis.

Obert Gutu, deputy president of the MDC-T led by Thokozani Khupe, confirmed receiving the invite, saying the party would be well represented at tomorrow’s meeting.

“We received that invitation and, yes, I can confirm that we are sending a four-member delegation because we think it’s an important process in kick-starting national dialogue. We are going to be represented in that meeting,” Gutu said.

“We are yet to sit down as the leadership, but I can assure you that Khupe, myself and Nickson Nyikadzino are, for now, in the provisional list of our delegation to the meeting. As a party, anything and everything that makes our country better, we are in agreement.”

Innocent Netanyahu, spokesperson of the Zimbabwe Partnership for Prosperity (Zipp), said: “We have been invited and we believe it’s a positive step. It proves that the President has been listening to many voices that our nation needs to set aside our differences and look at the bigger picture and have dialogue.

“We need to be magnanimous in defeat and victory and work together as Zimbabweans. Zimbabwe needs us to work together that way. We are the present generation that should rejoice when an elder calls for dialogue. We have to swallow our pride and develop for our country. That is the only way we can progress as a nation.”

Build Zimbabwe Alliance leader  Noah Manyika, however, said he had been advised that the meeting had been rescheduled to today at State House.

“I have since received a second message indicating that the meeting has been brought forward to tomorrow the 6th and will now be held at State House at 4pm,” he said.

“In my view, real and meaningful dialogue that will lead to the change we desperately need in our country can only happen if the people wrongfully detained have been released and the army is withdrawn completely from the streets and from manning roadblocks.

“It can only take place if, as the President promised upon his return from his overseas trip, the heads of those who have been responsible for brutalising citizens roll.

“Let me state clearly and unequivocally that I don’t believe the President has created the right conditions for dialogue, something that is in his power to do. I will attend this meeting to hear if he is now prepared to do so and will only be prepared to join any continuing dialogue if this is clearly the case.”