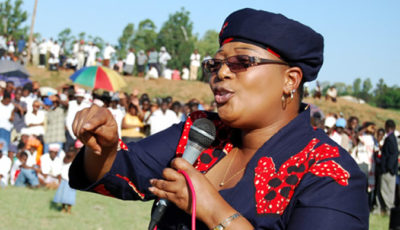 The hullabaloo sparked by parliament bringing Thokozani Khupe and her MDC-T crew into the august House to represent people who rejected them in elections, has sounded the death knell to democracy in Zimbabwe.

The effect of this brazen disregard of democratic tenets which dictate that political leaders are chosen by the people, is terminally harmful to the country.

This, happening in full glare of the world, leaves us standing out like a sore thumb; a shameless dictatorship deserving of global punishment.

It boggles the mind why Mnangagwa deliberately walks out to stand there — rogue as they come — and beyond polite disdain of his own judiciary. There is no justification, none whatsoever, to this political and moral injustice. It is a clearly provocative act meant to draw public opinion to hostility.

Khupe and her party, the MDC-T recalled MDC-Alliance Senators, MPs and councillors with the technical aid of the courts; and swiftly replaced them with unelected individuals, even as the process faced pending court challenge.

The Zimbabwe Electoral Commission had earlier declared by-elections would replace the recalled legislators. This was however overturned through a curious counter-declaration by the Health ministry banning all electoral activity citing Covid-19. Strangely though, Zanu PF has been allowed to hold its own by-elections that are currently taking place.

This blatant selective application of the law is what has sparked outrage. This excuse of ‘rule of law’ being peddled by Khupe and her acolytes is democratically nonsensical.

Article 15 of the MDC-T constitution clearly states that: “Every candidate seeking to hold office as a local authority councillor, mayor, Member of Parliament or Senator shall be elected through a primary election” and that . . . “voting shall be by secret ballot and the candidate polling the highest number of votes shall be declared winner”.

The only reason for the unpopular decision to go against this clear constitutional matter is that Khupe and her party are no longer playing their own game. They are a willing tool being used to destroy their own party for personal benefit — used to bury the opposition as it is known; forever.

Meanwhile, the MDC-A under Nelson Chamisa is not helping matters by their tired responses to incessant attacks on their very existence and outright provocation.

The thinly veiled disquiet within that party threatens to explode anytime and the resultant fissures may yield another spit. Chamisa’s mojo appears heading southward owing to non-action and an ever-distant “signal” that people have waited for into disillusionment.

People are sick and tired of being lied to. Dabbling in semantics as the MDC-A officials seek to do for the sake of political posturing is in itself a dead end.

Chamisa’s party cannot draw comfort from the oft-stated excuse: “the MDC-A is still a young party”. For how long are you supposed to be young?