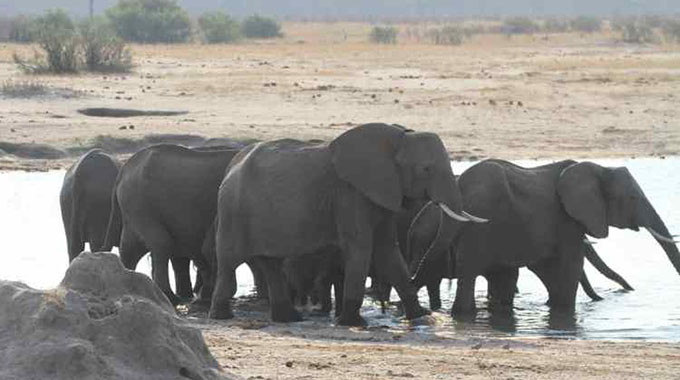 TWO more elephants were found dead in Victoria Falls last Friday, bringing to 27 the number of jumbo deaths in Zimbabwe in the last two months.

The Zimbabwe Parks and Wildlife Management Authority (ZimParks) suspects the deaths were a result of a bacteria and samples have been sent to the United Kingdom for tests.

The most affected areas are in the north-western  parts of the country where Hwange and Zambezi National Parks and forests such as Woodlands and Pandamasu are located.

“Another dead elephant was discovered in the same area later that day. We are suspecting a bacterial infection and we have sent samples to the United Kingdom.

“These deaths normally happen this time of the year. During the dry season animals travel long distances in search of food and water sources. Elephants are heat sensitive so this might be stress related.”

Zimbabwe is home to over 84 000 elephants, the second largest population in the world behind Botswana. Yet the country’s national parks have a carrying capacity of just 55 000.

“That’s why we are always saying we must depopulate certain areas, particularly Hwange and repopulate areas where there are lesser animals.

“We have capacity to repopulate the whole of Africa especially in countries which had elephants before but were wiped out due to various reasons like poaching.”

The first group of 11 elephants were found dead on August 28 with their tusks intact thereby ruling out poaching. The mysterious deaths had initially appeared to share some similarities with the unexplained deaths of hundreds of elephants in neighbouring Botswana in recent months.

Scientists are still to determine what killed the elephants in the Okavango Delta, northern Botswana.

Both male and female elephants of all ages have died and locals have reported seeing the giant mammals staggering and going around in circles before they die.