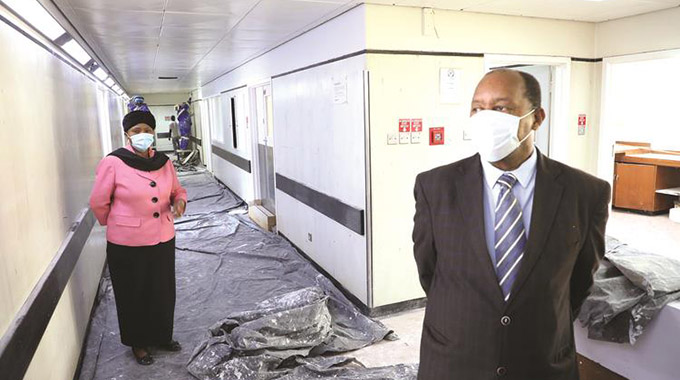 Defence and War Veterans Affairs Minister Oppah Muchinguri-Kashiri, who is the vice chair of the monitoring committee of the national Covid-19 taskforce, is led by her Health and Child Care counterpart Dr Obadiah Moyo on a tour of the Covid-19 management facility under construction at Parirenyatwa Group of Hospitals yesterday

Government has expressed concern at the slow pace of renovations at the Parirenyatwa Group of Hospitals’ Covid-19 management facility and wants the deployment of more manpower to meet the  target.

Although electrical works for the 25-bed facility have been completed, the hospital is still to finish an air ventilation system for infection control, plumbing, tiling and carpentry after which equipment for the wards will be required.

Speaking after a tour of the facility yesterday, Defence and War Veterans Affairs Minister Oppah Muchinguri-Kashiri, who is the vice chair of the monitoring committee of the national Covid-19 taskforce, said progress was at around 40 percent.

“Parirenyatwa Hospital is key to our interventions,” she said.

“When we decided that it should be one of the hospitals to render Covid-19 services to about 400 patients, Government set aside resources which started being utilised about a month ago and you can see that 40 percent of the work has already been done. However, there is still a lot of work to be done.”

Minister Muchinguri-Kashiri said from a briefing received from staff at the hospital, there was need for additional construction manpower to aid the works.

She said there was need to unlock the remaining US$25 million from what Government allocated for procurement of equipment for the wards, once construction works were complete.

Government had released $15 million for the construction works underway.

“What we are carrying with us today as a recommendation to the national taskforce is that resources should be released, both human and financial, as a matter of urgency,” said Minister Muchinguri-Kashiri.

“We were hoping that by end of this month, construction works would have been completed, but it seems we might not meet the target. There is still work to be done and we need to speed up.”

Health and Child Care Minister, Dr Obadiah Moyo, who was accompanying Minister Muchinguri-Kashiri, said while the pace was slow, he was pleased with the layout of the facility.

“I am impressed by the type of infection control that is being put in place here at Parirenyatwa Hospital,” he said.

“For a population of 425 patients, we would definitely need to have an efficient infection control mechanism in place.

“I have seen that they have put negative pressure units so that the health personnel will not be affected. We do not want our health personnel to be working in an environment where they will get infections, so this will be done extremely well using the correct standards.

“At the same time, this extraction system will ensure that viruses are burnt before they are let out into the open air.”

Dr Moyo said the facility had well laid out units for putting on personal protective equipment and taking them off.

“We have got a fantastic plan,” he said.