Morgan Tsvangirai: The life and times 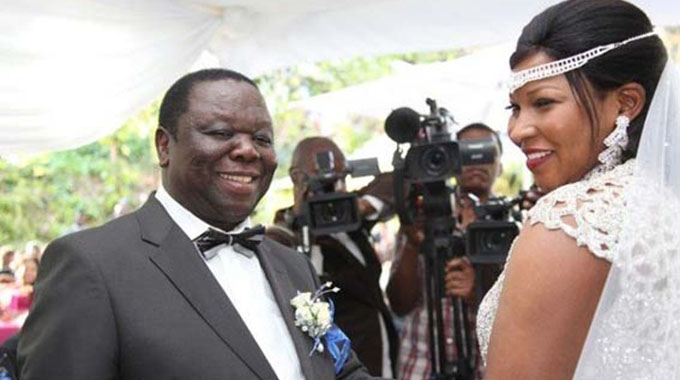 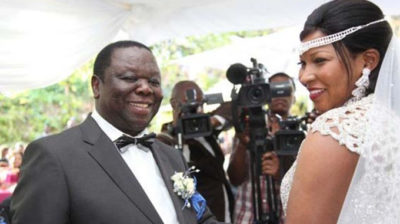 Sifelani Tsiko and Tichaona Zindoga
The death of veteran Zimbabwe opposition leader Morgan Tsvangirai on Valentine’s Day after a lengthy battle with cancer in many ways captures the perils and pitfalls of political life. Tsvangirai, who died at the age of 65 in South Africa, was without doubt one of the most influential politicians ever to emerge after Independence in 1980.

Love him or loathe him, he was one man who defined and shaped the country’s opposition politics in the post–Independence era. He will be best remembered for his ambition to dislodge Zanu-PF.
On many occasions, Tsvangirai saw himself as a man on a mission to bring about a stable democratic and peaceful Zimbabwe.
His critics saw him as a “puppet” and “stooge” of the West – not without merit – as he openly received backing of the Western countries that had turned against then President Mugabe, who championed land reform at the turn of the millennium.

To reinforce the view that he was not his own man, Tsvangirai on occasions called for sanctions against Zimbabwe and disinvestment in the country.
A particular point that further alienated him from a section of Zimbabweans was when he appeared to mock the suffering of the people at the height of sanctions, warning that Zimbabwe would continue to be squeezed if he was not voted into power.
As controversial was his attitude towards newly resettled farmers, whom he mocked as having illegally settled and “sprouted like mushroom”.

The country’s long-time opposition leader and former Prime Minister’s journey into political limelight is littered with successes, failures, shortcomings and controversies.
Perhaps it was fate that prevented him from realising his dream to lead Zimbabwe, often littering his path with pitfalls that included indiscretions in his personal life.

He was a tragic hero.
Despite all his shortcomings and controversies, the veteran opposition leader will best be remembered for standing firm in the face of hostilities.

His spirit to lead the opposition remained unbowed, perhaps tragically.
While many saw his as the face of opposition politics and influential politician who moved the ground of Zimbabwe’s multi-party politics and development of competitive and democratic approaches in the country, he was also accused of building a cult of himself in the opposition and was accused of tinkering with the constitution of his party to remove the initial presidential two-term limit.

He became the classical Big Man of opposition politics and would sometimes be ruthless with his rivals, who complained of “dictatorial tendencies” in his style of leadership.
He led MDC for 19 years, overseeing major splits in the organisation in 2005 and 2013.

Tsvangirai leaves the opposition in disarray due to his failure to handle the succession issue, which a less cult-like leader would have addressed.
But the political landscape in Zimbabwe was changing during the last days of Tsvangirai’s life.
His nemesis, Mugabe, left office in November 2017, amid pressure from the ruling party and an intervention by the military under Operation Restore Legacy.

The new administration of President Mnangagwa has been magnanimous with Tsvangirai.
On January 5, President Mnangagwa and Vice President Constantino Chiwenga visited the stricken Tsvangirai at his Highlands mansion in Harare, marking an important turning point in the development of healthy, clean and competitive politics.
To many, it was a giant leap of faith in the development of a stable democratic and peaceful Zimbabwe, marked by respect of differing opinions, views and beliefs.

President Mnangagwa’s magnanimity and strength of character has seen his Government footing Tsvangira’s medical bills and now, meeting the funeral expenses of Zimbabwe’s influential opposition figure.
This has made Zimbabwean politics humane and the envy of many.

It has put Zimbabwe firmly on the path of a new democratic dispensation, characterised by respect and co-existence with an independent and vibrant opposition.
Many things will be written and said about Tsvangirai. But it is also important to walk with readers on the story of the veteran opposition figure, his early life, the struggles he went through and his rise as a politician.

Morgan Richard Tsvangirai was born on March 10, 1952 in Buhera, about 220km south east of Harare.
The area he came from is in the Manicaland Province. He was the first of nine children from the union of Dzingirai Chibwe Tsvangirai and Lydia Zvaipa.

Tsvangirai’s father was a communal farmer, who also worked as a mine worker, carpenter and bricklayer.
The young Morgan did his primary education at St Marks Goneso Primary School in Hwedza, before he later moving to Chikara Primary School in Gutu and then to Silveira Mission.

He did his secondary education at Gokomere High School, where he got eight Ordinary Level passes. In April 1972, Tsvangirai first got a job as a trainee weaver for Elastics & Tapes textile factory in Mutare.
In 1974, it is said that an old school mate from Silveira encouraged Morgan to apply for an advertised job as an apprentice for Anglo America’s Bindura’s Nickel Mine in Mashonaland Central.

He was married in 1978 to Susan Tsvangirai. The couple had six children before his wife died in an accident in 2009. He got married to Elizabeth Macheka, three years later.
He spent 10 years at the mine, rising from plant operator to plant supervisor. During this time, he also became an active participant of the Associated Mineworkers Union.

This saw him gaining significant recognition in the country’s labour politics, culminating in his election as vice president of the Mine Workers Union in 1985. In the early 1980s, he was a member of Zanu-PF and largely subscribed to its Marxist-Leninist ideology. 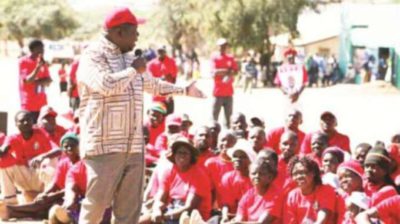 A glimpse into Morgan Tsvangirai’s life as an opposition politician

At one point, he even quipped that he was once a member of Zanu-PF. His defining moment in politics came in 1988, when he was chosen as secretary-general of the Zimbabwe Congress of Trade Unions, the country’s largest labour umbrella body.

His popularity surged and maintained grip of this role until he resigned 11 years later when the trade union split.
In 1997 and 1998, he led a series of strikes in opposition to former President Mugabe’s taxation policy. Tsvangirai, in these years, gained reputation and support for his boldness and fiercely challenging Mugabe.

During this period, he joined the National Constitutional Assembly and served as its chairman.
He strongly campaigned in favour of creating a new Constitution for Zimbabwe.
In 1999, he was thrust to the helm of the Movement for Democratic Change, a party that was launched on a ZCTU platform, with strong backing from white commercial farmers and Western governments opposed to the Zanu-PF Government’s plans to embark on long overdue land reform.

The MDC offered then President Mugabe his stiffest challenge in post-Independence multi-party politics, massing 57 seats to Zanu-PF’s 62 in Election 2000, with the remaining seat, Chipinge, going to Zanu (Ndonga).
He represented the MDC in the 2002 presidential elections and all subsequent elections losing all to his nemesis RG Mugabe.
Tsvangirai came closest to dislodging Zanu-PF when the revolutionary party embarked on the self-defeating bhora musango, that split the vote in favour of Tsvangirai in the first round of the presidential contest, necessitating a runoff in March 2008, before Zanu-PF regrouped to romp to victory in the runoff.

Tsvangirai was arrested, acquitted, and rearrested a number of times between 2002 and 2007. He was arrested for treason for plotting to assassinate the head of State in 2003, calling for mass protests and for taking part in a controversial prayer rally in 2007.
On September 15, 2008, former President Mugabe and Tsvangirai signed the Global Political Agreement. This negotiation led to a power-sharing agreement, with Mugabe remaining as President, Tsvangirai as Prime Minister, and another leader,

Mutambara, as Deputy Prime Minister.
On February 11, 2009 he was sworn in as Prime Minister of Zimbabwe.
Tsvangirai, during his political campaigns, promised bold changes, including doing away with policies that he said bred corruption and hampered economic growth.

He sought policies to end monopolies in certain sectors and free up civil liberties.
This played well with workers and young voters in cities and other areas in the country, but in the end that was not enough to unseat the ruling Zanu-PF.

In many ways, Tsvangirai was largely seen as a man who aspired for democracy, a man who offered Mugabe fierce challenge and inspired many in the growth and development of the country’s multi-party politics.
He is survived by six children from his first marriage and wife Elizabeth, though there have been reports of other children with various women.

Tsvangirai’s fact file
Compiled by Leroy Dzenga
Morgan Richard Tsvangirai was born on March 10, 1952 to Dzingirai Chibwe Tsvangirai and Lydia Zvaipa in Gutu, the third largest district in Masvingo Province.
He was the first born in a family of nine.
Tsvangirai received his secondary education at St Marks Goneso Primary School in Hwedza in Mashonaland East and Gokomere High School in Masvingo Province.
1972: Joins Elastic & Tapes Textile Mutare at the age of 20
1974: Gets a job as a plant operator at Trojan Nickel Mine in Bindura, Mashonaland Central 100km North East of Harare
1978: Marries Susan Nyaradzo Mhundwa
1980: Joins zanu-pf
1985: Becomes vice president of the Mine Workers Union
1988: Becomes Zimbabwe Congress of Trade Unions (ZCTU) secretary-general.
1988: Leaves zanu-pf
1991: Survives a Vote of no confidence by the ZCTU amid allegations of abuse of office.
1997: Organises anti-Government strikes.
1997: Becomes chairman of the National Constitutional Assembly
1999: Helps form the Movement for Democratic Change (MDC), becomes party leader.
2000: Runs for Parliament in Buhera North and loses to his cousin Kenneth Manyonda who is Manicaland Governor at the time.
2002: Runs against Robert Mugabe and loses, a result he contested in courts.
2001: Graduates from Harvard University’s John F Kennedy School of Government, with a diploma from the school’s Executive Leaders in Development Programme.
2005: MDC splits and his party was renamed to MDC-T (with the T derived from his surname Tsvangirai)
2008: Wins the first round of the Presidential election by a thin margin prompting a rerun. Loses runoff
2009: Is sworn in as Prime Minister in the inclusive Government.
2009: Loses wife Susan in a car accident near Beatrice.
2010: Receives an Honourably Doctor of Law Degree from Pai Chai University in South Korea
2011: Marries Locadia Karimatsenga in a short-lived marriage.
2012: Tsvangirai marries Elizabeth Macheka, whom he lived with till the time of his death.
2013: Is accorded a Honorary Doctorate in Public Administration by the Sun Moon University South Korea
2013: Loses harmonised elections to former President Robert Mugabe and zanu-pf.
2016: Is diagnosed with cancer of the colon
2018: Dies aged 65 in Johannesburg, South Africa