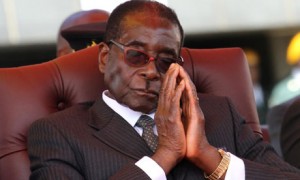 HARARE – The fledgling National Patriotic Front (NPF), which has received the public backing of ousted former leader Robert Mugabe — its alleged godfather — has now all but confirmed that its leadership corps will be fronted by members of Zanu PF’s vanquished Generation 40 (G40) faction, the Daily News can report.

This prompted a senior official of the ruling party last night to describe the new political outfit as “a very bitter coalition of the wounded whose sole mission is to play the role of spoilers” for President Emmerson Mnangagwa and Zanu PF in the country’s looming watershed national elections.

The confirmation of the major role of the G40s in the NPF also comes as the sulking Mugabe and his restless wife Grace have been fighting with Mnangagwa’s government over a range of issues — including its probes of the former first family’s alleged criminal dealings during their time in power.

Yesterday, the NPF ended weeks of speculation over whether G40 members would be part of the country’s newest political outfit after it publicly paraded and outed many of them.

At the height of the ruling party’s brutal factional wars, Mahoka was the main G40 weapon against Mnangagwa, at one time calling the then under-siege VP a lame duck.

However, karma was to later visit her, with the unhinged Grace surprisingly hounding her and Sandi-Moyo out of the women’s league and Zanu PF — which all raises the question of how these two will operate in a party in which the Mugabes appear to hold so much sway.

It was also revealed yesterday that Mashayamombe had been appointed the NPF’s acting secretary-general.

Other prominent G40 members who are part of the outfit are former Masvingo provincial political commissar Jeppy Jaboon and ex-Central Intelligence Organisation (CIO) operative Wonder Mashange, who was MP for Rushinga at the time of the annihilation of the G40.

NPF spokesperson Jealousy Mawarire told the Daily News that they had enlisted the services of many G40 functionaries, and were also in the process of luring more from Zanu PF.

“We had an inaugural meeting of the national founding executive committee (NFEC) as provided for in the transitional clauses of our founding constitution.

“We had provincial secretaries and secretaries of different departments to deliberate on our roll-out plan which will see us unveil the various party structures we have been quietly working on.

“We are going to field candidates in all contested seats available for the harmonised elections this year, including the 1 958 council seats and obviously the 210 parliamentary seats.

“The meeting was chaired by Sandi-Moyo as our president (Rtd Brigadier Ambrose Mutinhiri) had other important engagements with some foreign diplomats.

“The meeting also deliberated on our planned inaugural rally during which the full complement of our national founding executive committee will be announced,” Mawarire said.

Impeccable NPF sources later told the Daily News that Mugabe would be the guest of honour at the planned rally, where the party’s two vice presidents will also be announced.

Mugabe and Grace were the power and ultimate brains behind the G40 before its annihilation in Zanu PF.

In the meantime, it has also been learnt that more than 40 positions for the NPF’s executive are up for grabs, amid reports that most of the people who are likely to take these are G40 functionaries — some of whom are still “sitting on the fence in Zanu PF”, as they apparently await the completion of the ruling party’s CV-vetting process before they join the new party.

Mugabe has surprised both authorities and the general public alike in recent weeks by re-entering the political arena, and holding several meetings with opposition leaders — including openly lending his support to the NPF.

The NPF has also since revealed that Mugabe had endorsed the party, after the nonagenarian met Mutinhiri at his “Blue Roof” mansion in Harare, although the party denies that the 94-year-old has a formal role in its activities.

“I don’t think the party will survive, and I doubt that it will fly very far. The G40 is largely discredited and there are no new faces there that can overcome the stigma that is associated with the new party.

“If those who fail to make it in Zanu PF think that they have a chance in NPF, it could mean of course that they could try their luck there.

“But I think the real fight is between Zanu PF and the MDC. Yes, it (NPF) could affect Zanu PF, but I don’t think it will cause any major upsets,” Masunungure told the Daily News.

But academic Ibbo Mandaza, one of the harshest critics of Mnangagwa’s government, said without Mugabe Zanu PF was “as good as dead”.

“Clearly, judging from the people in the party, Zanu PF is torn, it is wounded. Zanu PF will never survive post-Mugabe … some would say Zanu PF is dead,” Mandaza added.

The tables were turned on the then seemingly untouchable Mugabe on November 21 last year when he resigned moments after Parliament had started damaging proceedings to impeach him.

This followed a military intervention that was code-named Operation Restore Legacy, which saw the nonagenarian and his then equally powerful wife, Grace, being placed under house arrest.

Several Cabinet ministers linked to the G40 faction were also targeted in the operation, which ended just before Christmas — with the military only retreating back to their barracks after five weeks of executing the operation.

Mugabe has publicly been at loggerheads with Mnangagwa’s administration ever since he broke his silence over his stunning ouster. He has complained about the manner in which he lost power, as well as the alleged harassment that he is suffering at the hands of the new authorities.

Lately, his former allies have also made desperate distress calls to both sitting and former heads of State on the continent, on fears that the government may arrest the nonagenarian and his unhinged wife Grace over allegations that he engaged in myriad criminal activities while in power.

Grace is already under serious police investigation after being implicated in the smuggling of the country’s ivory stocks, with several other ongoing probes said to be targeting the former first lady in the offing.

Mugabe fell out with Mnangagwa when he fired the country’s new leader both from being his deputy in government and from Zanu PF in November last year, as the nonagenarian’s long-drawn succession war boiled over.

They had until then shared a very close relationship that dated back to the days of the liberation struggle when Mnangagwa was the 94-year-old’s aide.