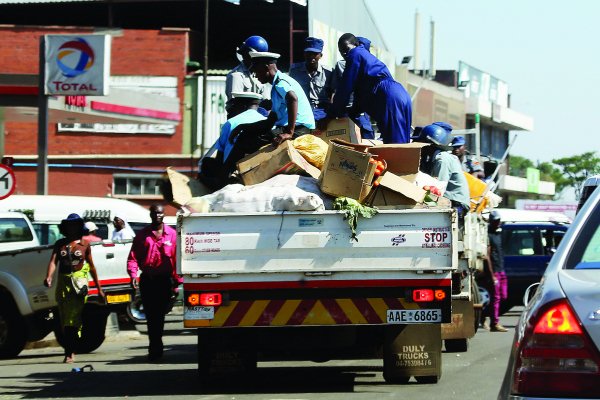 The youthful MP, who was driving around the town, ordered the cops to leave the vendors, arguing they should not be harassed as they were trying to eke an honest living in a hostile economic environment.

The municipal cops heeded the call and returned the goods they had confiscated.

Business came to a standstill at the Marondera Gulf Complex as the vendors celebrated the temporary relief.

“Since Monday, we have been stranded as the police led the raids on us. We want to survive and we cannot take this anymore. We are happy that the legislator stood for us and took the bull by the horns,” a cellphone dealer who operates at the complex said.

“We are elected by the people to represent their interests instead of destroying their properties. We must not confiscate people’s property,” he said.

“We have one cholera patient at Marondera (Provincial) Hospital who is not even from Marondera, but Macheke. We must not take advantage of the situation and chase away vendors.
“Council must first build designated selling shelters before chasing them away. About 60% of families in Marondera survive on vending.”

After Matewu’s intervention, vendors were back on the streets.

But their joy was short-lived as municipal cops came back accompanied by riot police and raided vendors and took everything on site, including chairs and cardboard boxes.

The vendors were left counting their loses after their stalls were demolished.

On Monday, police launched a blitz which saw a number of vendors losing their wares in a move meant to combat the spread of cholera.

Vendors who were nabbed were reportedly fined $10.

Since the outbreak of cholera recently, Mashonaland East province has recorded six cases, with the victims being visitors from Harare.