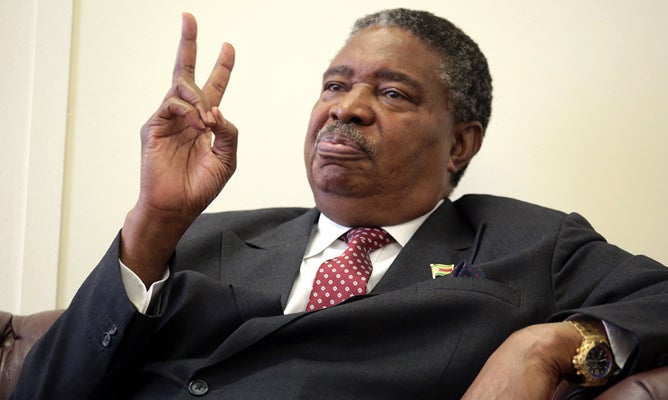 FORMER Vice-President Phelekezela Mphoko was arrested and brought before a Bulawayo provincial magistrate yesterday facing charges of criminal abuse of office when he was still in the presidium.

His court appearance follows a dramatic week where the ex-VP was alleged to have evaded arrest by Zimbabwe Anti-Corruption Commission (Zacc) since Friday, saying he feared being detained in police cells where he would be poisoned.

Mphoko (79), through his lawyer Zibusiso Ncube, then struck a deal where he would be taken to court without having to be detained.

Magistrate Enias Magate granted him $1 000 bail and remanded the matter to September 4, wherein his trial will be transferred to Harare where the alleged offence occurred.

As part of his bail conditions, Mphoko was ordered to report once a week at the CID Commercial Crimes Divisions in Bulawayo, surrender his passport to the clerk of court, not to interfere with State witnesses and continue to stay at his given address until the matter is finalised.

The State alleges that Mphoko abused his authority as a public officer.

Prosecutor Thompson Hove told the court that Mphoko’s actions were inconsistent with his duties as a public officer and were a violation of section 106 of the Constitution.

Meanwhile, Mphoko’s lawyer protested the behaviour of Zacc officers during the ex-VP’s initial court appearance, saying they harassed his client and acted unprofessionally when they attempted to effect an “illegal arrest” at his residence on Friday.

According to the State, Zacc on May 6, 2016, received a report of allegations of fraud and criminal abuse of duty against Zinara officials. Investigations led to the arrest of Norupiri and Juma.

The two were charged with criminal abuse of office as defined in section 174 of the Criminal Law (Codification and Reform) Act and detained at Avondale Police Station pending their appearance in court.

It is the State’s case that at around 6pm, Mphoko, who was at the time the Acting President, stormed the police station and ordered the pair’s release from custody.