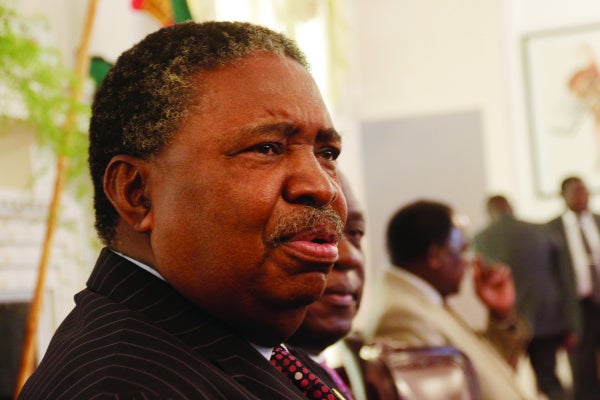 FORMER Vice-President Phelekezela Mphoko yesterday filed an application for declarator at the Bulawayo High Court seeking an order declaring the withholding of his pension by the government illegal and unconstitutional.

In his founding affidavit, Mphoko submitted that he joined the civil service in October 1981 and served as Zimbabwe’s envoy to various countries.

“On December 10, 2014, I was appointed to the position of Vice-President of the country, a position I held until I was removed from office in November 2017,” he submitted.

“In terms of section 102(3) of the Constitution of Zimbabwe, I am entitled to a pension which is equivalent to the salary of a sitting Vice-President. From the time I left office, I have not received a single dime in respect of my pension. The current Vice-President receives a monthly salary of approximately US$14 000 or the equivalent at the previous interbank rate. This, therefore, means that to date, the arrears are in the sum of US$308 000 or the equivalent at the prevailing interbank rate. Neither have I received any of my benefits.”

Mphoko submitted that there is no lawful reason why the pension is being withheld. He said he engaged Sibanda’s office to assist in the matter, but he has not found any relief.

“In fact, I was being tossed from pillar to post seemingly with no one prepared to deal with the issue,” he submitted.