MPILO Central Hospital in Bulawayo remains open to admit patients despite its 197 staff members being sent on self-quarantine after four people, including one nurse, tested positive to COVID-19 last week. 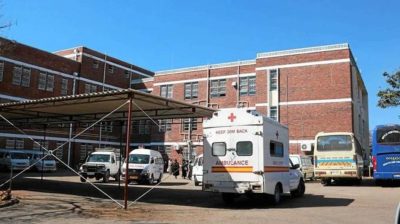 This was confirmed by the hospital’s acting chief executive Solwayo Ngwenya yesterday.

Reports on Monday indicated that a total of 197 health workers at the hospital in Bulawayo were placed in self-isolation following the positive tests.

Two of the people contracted the coronavirus after they had been admitted to the hospital, while the third person was an outpatient.

Ngwenya yesterday said the health institution was still open for admissions despite the development.
“The state of the hospital is stable as usual and is open for admission. It can never close as it caters for the whole of the southern region in Zimbabwe,” he said.

“Conditions are still the same. Patients and staff continue to be tested as before. The current status is as per government guidelines and there has been no increase in the number of quarantine. Some of the 197 staff will be returning to work on Thursday.”

Ngwenya said the public must exercise extreme caution as the country was facing a very difficult time.
“Their behaviour will ultimately lead to hospitalisation, causing chaos with staff infections, staff shortages due to self-quarantine measures,” he said.

“Ultimately, terrible collapse of health delivery system and mounting death rates will occur. There must be lockdown until we are very clear about the disease. It is better to be locked down and survive than be buried within weeks. In conclusion, the virus is an ultimate killer, it will kill some of us and it will do it efficiently in large numbers. Control our safety and survival, even if it means next year.”

According to reports, it is suspected that the nurse contracted COVID-19 due to interaction with one of the patients who had visited the referral hospital.

After the cases were confirmed, the city’s rapid response team was contacted to contain the potential spread of the virus.

Through contact tracing, however, the team identified 197 health workers who were at high risk of contracting the disease, and placed them on 14-day mandatory self-isolation while under surveillance.
The self-isolation process started on May 28 and is expected to end on Thursday this week.

US engagement supports what’s important to the people of Zim

Magufuli unwinding the clock of democracy