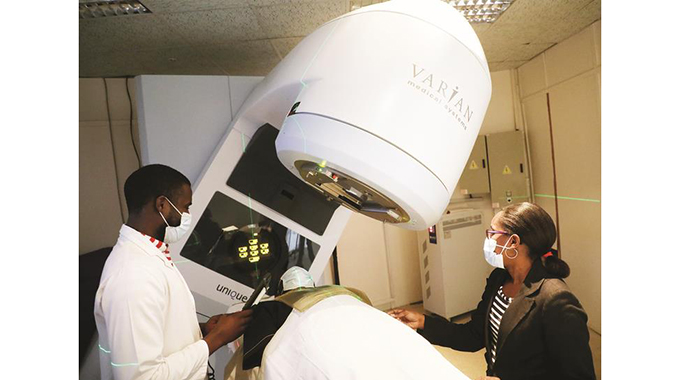 Doctors attend to a patient on a radiotherapy machine at Mpilo Hospital yesterday.

MPILO Central Hospital has resumed radiotherapy services following Government’s intervention which resulted in the deployment of a physicist, a month after machines that had broken down were fixed.

From August last year, Mpilo had been unable to cater for cancer patients from the Southern region following the breakdown of its machines.

Last month, Government paid for servicing and the machines were fixed, but could not be run as the hospital had no physicist.

Radiotherapy is the use of radioactive rays to kill cancer cells and/or shrink their growth.

The effects of radiotherapy are localised and confined to the region being treated or targeted, making it impossible for the cells to continue growing and dividing.

The lifesaving treatment, which can only be accessed at Mpilo and Parirenyatwa in the country, is essential in the cure of several cancers including cervical cancer which accounts for more deaths in women.

On August 15 last year, the machine meant to service cancer patients from the southern region broke down forcing people to travel to Harare.

Our Bulawayo Bureau caught up with staffers at the radiotherapy centre yesterday who expressed gratitude to the Government for ensuring that the service resumes despite challenges.

Mpilo acting chief executive Professor Solwayo Ngwenya said more resources were needed to ensure the service is not discontinued for any reason as that could lead to compromised quality of life for the patients.

“We are very happy that the machines have finally been fixed and we have a physicist who was seconded by the Ministry of Health and Child Care to help administer the treatment. We are particularly grateful that all the work which has been done so far was facilitated by Vice President Constantino Chiwenga during his last visit,” said Prof Ngwenya.

Head of the radiotherapy department Dr Tatenda Chingonzoh said they had about 120 patients on the waiting list last year when the machine broke down.

“We are happy that finally we will resume offering radiotherapy at Mpilo although we are in need of a physicist. The one we have is temporary and then the day he goes we will be forced to suspend the services as this type of treatment needs highly qualified personnel.

“We wish we had a way to train at least four physicists a year so that we solve this perennial issue of having to stop treatment because there is no one available to help treat the patients.”