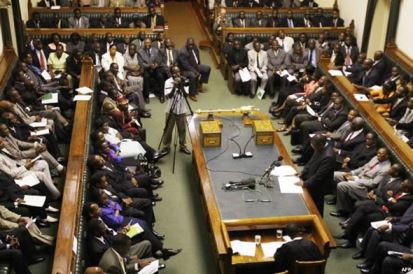 HARARE – Legislators have slammed the Parliament of Zimbabwe for lacking proper facilities for handicapped people after a visually impaired Zanu PF proportional representative MP, Rossy Mpofu, almost fell while going to the podium to present her motion.

Mpofu almost fell as she was going to the podium before Independent Norton MP Temba Mliswa, came to her rescue.

The spectacle highlighted the plight of disabled people and was described by empathetic fellow MPs as rather ironic, given that the Parliament is supposed to be a beacon of democracy for all, including the physically challenged.

Chikwinya called on the National Assembly to address this issue urgently saying physical impairments can befall any MP or anyone at any given time.

“Madam Speaker, honourable …Mpofu is in Parliament for a second term. She sits exactly at the same point where she is and I raise the point of order on the basis of what happened when she was coming to debate. I do not think Parliament has no capacity to install mechanisms that can assist people that live with her condition so that she can debate from where she is,” he said.

“Any member who is sitting here can fall into that condition at any time. It must then not take away your ability to debate. I want to move that Parliament intervenes by putting in mechanisms that allow members who have that condition to be assisted to debate from wherever they are.

“It became a safety hazard to the honourable member that almost got tripped when Parliament has got an Information Communication and Technology (ICT) department that can put in place enough mechanisms that will make people with such a condition to debate in comfort.”

Zanu PF Chegutu West MP Dexter Nduna said as Parliament begins debating the 2019 National Budget, equipment that is of help to people living with disabilities should be availed seeing that they constitute 10 percent of the country’s population.

He said as the legislators they have the power to make laws that accommodate all people, therefore they should ensure that everyone in Zimbabwe is catered for.

“I just want to second honourable Chikwinya but in this way honourable Speaker Ma’am. I have often said if you point a finger at one, you have got four others pointing right back at you. My point exactly is that as a House that makes rules and laws for the good governance and order of the people of Zimbabwe, it is us who are supposed first and foremost to make laws that also deal with housekeeping issues in the National Assembly,” Nduna said.

“We are going to be debating the 2019 National Budget in a few days to come and as we do so Madam Speaker, I, ahead of time, make a clarion call that all materials that are used by those that are differently abled be imported duty-free Madam Speaker, aware that this country has got more than 1,5 million who constitute 10 percent of our population.

“I ask ahead of time that it be taken note that, we have with us materials that are supposed to be used by those that are differently abled like honourable Mpofu and that as it might be honourable Speaker.”