OPPOSITION MPs have demanded transparency and tangible results on the mega deals that were reportedly clinched by President Emmerson Mnangagwa since he came into office. 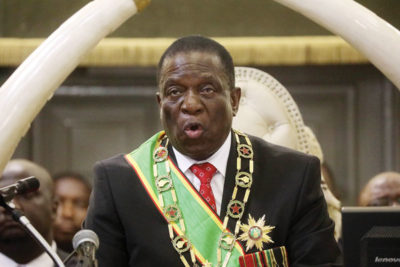 Mnangagwa claimed that his new administration unlocked investment pledges worth over $15 billion ranging from new platinum mines to steel mills and hydropower dams although there was nothing much on the ground to prove his claims.

The legislators feel that Parliament has been sidelined in terms of treaties signed by the Executive.

The issues came out during debate on the Second Reading Stage of the International Treaties Bill (HB10 2019) which sailed through before the House adjourned in March and whose debate is set to resume on May 5 when Parliament resumes sitting.

Section 34 of the Constitution is clear that all international instruments entered into by the country must be domesticated.

It states: “The State must ensure that all international conventions, treaties and agreements to which Zimbabwe is a party are incorporated into domestic law.”

But, while contributing to the Second Reading Stage debate on the Bill before Parliament adjourned due to the coronavirus scare, Mutasa South MP Regai Tsunga (MDC Alliance) said there were still several treaties and agreements that have not been ratified or domesticated.

“Parliament has been systematically sidelined by the Executive in its consideration of international conventions, treaties and agreements, and this haphazard, unsystematic, unco-ordinated, opaque and arbitrary approach does not pass the test of transparency and accountability in terms of how these treaties are eventually signed and agreed upon,” Tsunga said.

“We have seen the Executive signing mega deals and coming to make pronouncements, which pronouncements are just made prior to Parliament, having seen those treaties and the result has been that we have not seen anything happening on the ground other than the pronouncements of the mega deals.”

“The Bill needs to cure the mega deals syndrome where these are just singed – which deals never see the light of day because nothing happens beyond pronouncement. However, the Bill is still a progressive law and it will ensure that Parliament is involved in domestication of progressive international laws that will seek to improve governance, fight for constitutionalism, protection of human rights and fight to improve human security,” Tsunga said.

Nkulumane MP Kucaca Phulu (MDC Alliance) said there is a gap in terms of ratifying and domesticating international treaties with a number of agreements signed, but have not found their way to Parliament. He said as a result there is no clear mechanism to compel the Foreign Affairs minister or whoever is responsible for international trade to bring the laws before Parliament for domestication.

Phulu said the Bill should ensure that no debt is accumulated with any foreign or international organisation without first going through Parliament.

MDC legislator Paurina Mpariwa (PR MP) warned that the Executive should not take the powers of the Legislature because law making was solely the duty of Parliament.

“We have ratified a lot of laws that are on the shelves and are not being domesticated. The Justice minister must speak to his colleague ministers because nothing has been brought before Parliament for ratification,” Mpariwa said.

Justice minister Ziyambi Ziyambi said the International Treaties Bill – when passed into law will give a legal framework on what Zimbabwe should do when entering into international treaties until they are ratified and publicised so that the public is also aware of them.

“I think this Bill will actually strengthen the role of Parliament insofar as the ratification and domestication of international treaties is concerned,” Ziyambi said.

When Parliament resumes in May, the Bill will go through Committee Stage where it will be scrutinised clause by clause.