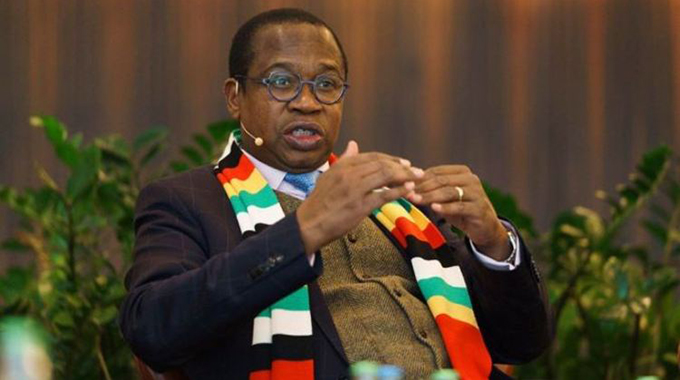 Golden Sibanda Senior Business Reporter
Finance and Economic Development Minister Professor Mthuli Ncube, has vowed to defend the stability and value of the Zimbabwe dollar against other (especially major) currencies to address concerns over its desirability as a store of value.

Fiscal and monetary authorities contend that key fundamentals and empirical evidence suggest that the Zimbabwe dollar should exchange with the US dollar at between $5 and $8.

However, the Zimbabwe dollar to US dollar exchange rate is currently way higher than that reportedly due to lack of confidence in the users and the risk premium it carries.

This comes as the Zimbabwe dollar exchange rate has depreciated extensively against the US dollar from $2,5 to US$1 in February this year to about $15,77 to US$1 now on the interbank market, while the exchange rate is even higher on the parallel market.

Liberalisation of the exchange rate was done in terms of currency reforms, being only part of extensive economic reforms envisaged under the Transitional Stabilisation Programme (TSP) to place the economy on a sustainable growth pedestal.

Inadvertently, the floating of the exchange rate and subsequent depreciation of the currency, which the Government made sole legal tender in June this year, has resulted in inflation skyrocketing from 5,39 percent in September 2018 to 175,5 by June 2019.

This has been the result of pass-through effects of exchange rate dynamics on prices, which is factored in into consumer prices in a market almost 60 percent dependent on imports and where prices religiously track the prevailing exchange rate.

But a more stable Zimbabwe dollar will increase its desirability as a store of value, allowing the people earning in the currency to save in the domestic unit, enhance predictability in long term planning as well as ensure reasonable stability in prices.

Already, part of interventions to defend the Zimbabwe dollar saw the RBZ sterilising or removing from the market about US$1 billion reserve or idle money, which with agreement of the owners, has been invested in an interest bearing bond.

The bank’s Financial Intelligence Unit (FIU) in August froze about five bank accounts of companies that were suspected to have been trading and influencing wild changes in rates.

Minister Ncube told The Herald Finance & Business in Victoria Falls last week that key interventions will entail a measured increase of Zimbabwe dollar notes and coins when increasing cash in circulation as well as keeping a leash on money supply growth.

“When we introduce the cash, the cash injection into the system we will be swapping RTGS dollar with cash, so that is how we will control money supply in the economy.

“So, it will not be just additional cash injection, but it will be a process of substitution (of RTGS dollar for notes and coins) and we are going to drag that (RTGS) out. It will not be everything on one day, but we will drag it out accordingly,” Minister Ncube said.

“We will swap RTGS for cash; that is a prudent way of injecting cash into the system; so we believe that approach will help us, at least not to push prices up, cause speculative demand to appear again.

“That will be a prudent way to manage it, but as I said, the injection of cash in general is going to deal with cash shortage problem, which is creating a market for domestic cash as you know.

Zimbabwe has over the last three years, from about April 2016, faced acute shortage of cash, which has spawned a thriving black market for cash where desperate people are charged premiums of up to 50 percent to swap their RTGS dollars.

“So, by injecting more cash, we are solving that problem (cash shortage), but we want to do it responsibly by drip feeding the economy with cash,” the finance minister said.

Dr Mangudya said last week that the RBZ will over the next six months increase physical cash, out of $19 billion total money in the market, from about $855 million at the moment to about $1,9 billion, which will be equal to 10 percent of deposits.

The accommodation rate hike was meant to stymie speculative borrowing from banks with the intention to finance the destabilising currency trading activities in the country.

Asked what measures had been put in place to prevent reserve money from further hurting the domestic currency in ways that dent market confidence, Minister Ncube said the RBZ’s Financial Intelligence Unit had the autonomy to monitor and block such funds.