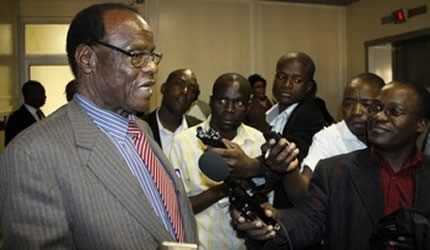 On Friday the Registrar General, Tobaiwa Mudede, refused to answer press questions on the contentious issue of the voters roll.

The MDC have still not received an electronic version of the roll and could only access a hard copy after a court ordered they should have it by mid day on the actual day of the election.

The hard copy of the voters roll contains 6.4 million names and is many thousands of pages, in numerous boxes. It is almost impossible to audit such a hard copy.

The Electoral Act clearly states that Mudede was obliged to furnish candidates with the hard and electronic copies of the roll “within a reasonable period of time.”

At a press conference in Harare, Mudede said the electronic version of the roll had become a “contentious” issue, and handed the question over to one of his officers.

The officer said: “The time we had was short. We had to prioritise the hard copy so that we could send them to the polling stations”

When journalists pressed Mudede on this question he said: “I am entitled not to answer certain questions. You can’t have a perfect system. There is always a 10% margin of error.”

Govt forges ahead with growth thrust

Govt to ramp up Covid-19 vaccination drive this week

Everyone has a duty to clean Zim: VP Chiwenga