The Zimbabwe Electoral Commission said that Zanu-PF had won 142 seats in the 210-seat chamber.

Analysts say the result is enough for Zanu-PF to change the constitution. Results in the presidential race have yet to be announced.

Mr Mugabe’s main rival has already dismissed the election as “a sham”. 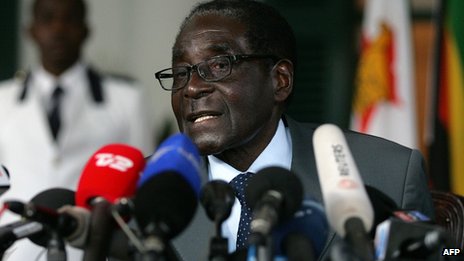 Robert Mugabe is running for a seventh term in office

Prime Minister Morgan Tsvangirai, who heads the Movement for Democratic Change (MDC) and is running for president against Mr Mugabe, said the vote had been a “huge farce”.

A local monitoring group has also said that the poll was “seriously compromised”.

However, the two main observer groups have broadly endorsed the election, saying it was free and peaceful.

African Union mission head Olusegun Obasanjo dismissed complaints of fraud, saying the election was fair and free “from the campaigning point of view”.

Monitors from the Southern African Development Community (SADC) described the elections as “free and peaceful” but said it was too early to call them fair.

Zanu-PF and the MDC have formed an uneasy coalition government since 2009. That deal ended deadly violence that erupted after a disputed presidential poll the previous year.

Before the latest results were announced, Zanu-PF spokesman Rugaro Gumbo predicted that Mr Mugabe, 89, – who is running for a seventh term – would get at least 70% of the vote in the presidential poll.

“We are expecting a landslide victory,” he was quoted as saying in Zimbabwe’s state-run Herald newspaper.