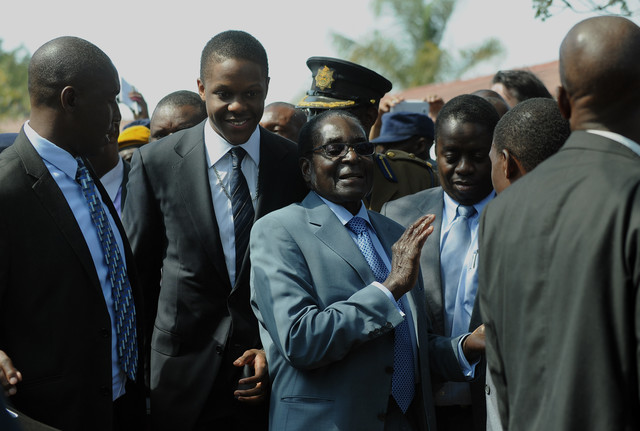 Robert Mugabe, Zimbabwe’s president, center, and his son Bellarmine, second left, leaves after voting at a polling station in a school in Harare on July 31, 2013.
Photographer: Alexander Joe/AFP/Getty Images

Mugabe and his Zimbabwe African National Union-Patriotic Front will boost the economy through its policies of indigenization and economic empowerment, the party said in a statement handed to reporters today in the capital, Harare.

“Over the next five years, Zimbabwe is going to witness a unique wealth-transfer model that will see ordinary people take charge of their economy,” it said. “The people of Zimbabwe have given President Robert Mugabe and ZANU-PF a clear mandate to transform the economy through indigenization and economic empowerment.”

Mugabe, 89, extended his 33-year rule of the southern African nation with 61 percent of the vote in the July 31 election and his party secured a two-thirds majority in parliament. Prime Minister Morgan Tsvangirai, who won 34 percent, called on the African Union and the 15-nation Southern African Development Community to back his demand for a rerun. Zimbabwe’s benchmark stock index fell 11 percent yesterday, the biggest fall since 2009.

With its indigenization policy, Mugabe and Zanu-PF have forced mining companies such as Impala Platinum Holdings Ltd. (IMP) and Anglo American Platinum Ltd. (AMS) to cede majority stakes in their local assets to black Zimbabweans or the government. The southern African nation has the world’s second-biggest platinum and chrome reserves, as well as diamond, gold and coal deposits. Tsvangirai had promised to repeal the measure.

While African countries largely endorsed the vote as credible, the U.S. called the vote “deeply flawed,” while the U.K. said it had “grave concerns over the conduct of the election.”

The government of Botswana, which borders Zimbabwe, broke ranks with other regional nations yesterday by calling for an independent audit of the vote. The irregularities found by observers indicate that the process “cannot be considered as an acceptable standard for free and fair elections in SADC,” Botswana’s government said in a statement.

To contact the editor responsible for this story: Antony Sguazzin at asguazzin@bloomberg.net

via Mugabe Plans to Transform Zimbabwe Through Wealth Transfer (1) – Businessweek.

All show and no substance – Zimbabwe Vigil Diary