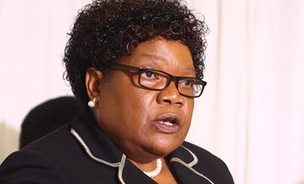 HARARE – As Zimbabwe hurtles towards the crunch July/August harmonised elections, former vice president Joice Mujuru, who now leads the National People Party (NPP), finds herself in no woman’s land, with her party broke and supporters fleeing to other parties.

Once touted as the one to succeed former president Robert Mugabe, Mujuru was unceremoniously fired from her position in 2014 — and riding on a wave of public sympathy, she went on to form her own party, the Zimbabwe People First (ZPF). Scores of former Zanu PF stalwarts followed her but then later turned against her.

Former politburo members Didymus Mutasa, Rugare Gumbo and Kudakwashe Bhasikiti left her and to her credit — although she wobbled — she plodded on and formed the NPP,  party that has a sprinkling of Zanu PF and MDC rejects, but which for now is finding the going hard against the big boys of local politics, namely, the mainstream MDC led by Nelson Chamisa and Zanu PF led by President Emmerson Mnangagwa.

Academic and researcher Ibbo Mandaza told the Daily News that although the grounds are fertile for an opposition victory, Mujuru is feeble on her own and will not win in any constituency.

“The opposition forces are far bigger than any political party and it is now up to the leaders of those parties to capitalise on the fertile ground, she has a chance if she joins other organisations but on her own, she has little or no chance at all,” said Mandaza.

Professor of World Politics at the School of Oriental and African Studies at the University of London, Stephen Chan, said Mujuru will not get a single seat in the forthcoming elections.

“I think the fortunes of Joice Mujuru will not revive for the elections. The fall of Mugabe and the declared agenda of Mnangagwa stole all her ground from under her feet. She can no longer gain political credit from being persecuted by a man who no longer holds office.

“And Mnangagwa’s modernisation and internationalisation agenda has stolen ground from Chamisa as well as leaders of smaller parties like Mujuru. I do not think her party will gain a single seat in the elections,” said Chan.

With only a few weeks left before the litmus polls, analysts have already dismissed the decorated liberation struggle war icon chances in the forthcoming elections, saying she is a spent force.

Apart from internal conflicts, he NPP is also dogged with financial woes at a time when Zanu PF has splashed at least $2 million on advertising material including electronic billboards.

Through her spokesperson Gift Nyandoro, who also doubles as the NPP secretary-general, the former VP — who was married to the country first army general the late Solomon Mujuru — was facing the same financial problems afflicting all Zimbabweans.

“I have heard allegations that we are having financial problems but we are not a profit making organisation, we are a political party that thrives on the foundations and principles that believe that another Zimbabwe is possible. NPP is no different from local churches that thrive on tithes from their members. Just like any other political party, challenges are expected, put simply any challenges that is premised on allegations of financial challenges is bound to be very normal in a country like Zimbabwe, we don’t have a money to buy posters or buy chiefs cars like what Mnangagwa did, there is no difference between government and party,” said Nyandoro.

While Zanu PF, just like the MDC have parliamentary representation, they have access to funding under the Political Parties Finance Act of 2001, which was enacted to ensure that parties do not receive money from foreign governments.

Mujuru’s party has no representation in Parliament and depends solely on the goodwill of its supporters, according to Nyandoro.
“We are not losing sleep over that. The truth is going to be revealed in the next elections, we are not a dark horse, we are the government-in-waiting,” said Nyandoro.

Dissecting the problems that have bogged NPP and eventually resulted in several splits, political analysts said the tragedy of Mujuru is that she failed to define herself and dithered on joining the MDC Alliance led by Nelson Chamisa.

“There are a plethora of factors that made Mujuru’s political project not that exhilarating as the euphoria of her bravado to defy Mugabe and her own political outfit slowly but surely waned. Firstly, the ideology from which her party is based is hazy and people struggle to draw the line between what her outfit stands for and what Zanu PF stands for.

“Secondly, she was a tainted political figure with many allegations of corruption and plunder of national resources that hovered over the name Mujuru. People simply do not have an appetite for leaders allegedly involved in the plunder of our nation,” analyst Maxwell Saungweme said.

Mujuru and her late husband, just like most Zanu PF politicians, are widely counted amongst the richest politicians in Zimbabwe, although she denies it.

While most Zimbabweans celebrated Mugabe’s demise last November, Mujuru was ambivalent, her response somewhat lukewarm and that effect, according to Saungweme, also further tainted her political standing.

“She seemed to be going against the grain when she showed sympathy for Mugabe after the coup, yet all people converged on ‘Mugabe must go’, though they did not say they wanted a junta regime after Mugabe.

“If she was politically tactful, maybe she should have joined Zanu PF under Mnangagwa and his junta, as her political aspirations are similar to Zanu PF’s and are moored on the need to safeguard their ill-gotten wealth.

“Alternatively, she must have buried her pride and heeded calls by Tsvangirai to join him and his MDC in the so-called ‘big tent’. But this would have meant her accepting an inferior role to Tsvangirai, now (Nelson) Chamisa.

“By doing this, she would have been clear that she is now an opposition member. Currently, people doubt whether her outfit is genuinely opposition or is a political blend of ruling and opposition ideas.

“People can’t follow a party which is not clear about being opposition or seeking to maintain the ideals of ruling party, which are in her political DNA,” said Saungweme.

At 63, Mujuru is now entering the twilight of her political career and apart from age, something else might be standing against her, her gender.

“To a limited extent, her botch and the failure of her party are attributable to patriarchy or the Zimbabwe political terrain that is unfortunately averse to female leaders. But largely, she is responsible for the failure of her project and her lack of political sophistry and cohesive leadership are largely to blame for weak showing of her political endeavour.

“She will not be a dark horse in the impending elections. The battle is between Chamisa and Mnangagwa,” Saungweme said.