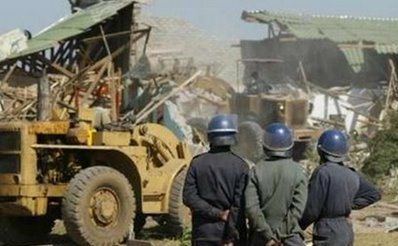 HARARE – Victims of the infamous Operation Murambatsvina are still suffering in silence a decade later as government’s promise to relocate them is yet to be fulfilled.

Government, led by the City of Harare spearheaded and launched a massive insensitive demolition of illegal houses in 2005 dubbed Operation Murambatsvina.

The assault destroyed assets and sources of livelihoods on the pretext of urban renewal campaign. According to the United Nations, some 750 000 people lost their homes and businesses.

More than a decade later, thousands of affected people allocated plots of land under the Operation Garikai/Hlalani kuhle live in settlements with no basic services, schools, clinics and were driven deeper into poverty.

“Additional settlements have emerged, and the population continues to grow, yet they do not have water and sewerage connections to maintain good sanitary hygiene.

“Such places as Hopley, Eastview and Hatcliffe absorbed thousands of displaced people, who almost started their lives from zero after their hard-earned savings and assets such as houses were overnight demolished without any compensation,” HRT said.

In the meantime, masses of urban dwellers are reportedly struggling as more settlements declared illegal continue to be demolished.

During his campaign before elections, President Emmerson Mnangagwa said that he would prioritise housing, although not many strides have been reported to date.

On the other hand, the issue of land allocation has remained obscure.

Land barons have remained on the loose in many urban areas, and residents have allegedly reported the involvement of city-fathers in illegal land dealings.

“Land barons, in partnership with corrupt council management, councillors and housing cooperatives have been evidently paying huge bribes to process the change of use
of land designated for schools to residential without following the due process of the law in terms of the Regional, Town and Country Planning Act (Chapter 29.12) and the numerous municipal by-laws, as well as the Urban Councils Act (Chapter 29.15),” HRT said.

Meanwhile, Harare residents of Budiriro, Crowborough, Sunningdale and Tynwald South are also reportedly hit on the education front as they do not have secondary schools, and their primary schools are inadequate to cater for their growing populations.

“Reports abound that serving and former serving councillors have taken turns to take by force land originally designated for secondary and primary schools and converted the spaces into residential areas, thus depriving the pupils of their right to access educational facilities within their own areas of residence.”

HRT also alluded that government needs to prioritise the issue of land and the provision of basic needs such a water, health and education which are lacking in many communities throughout urban areas.

“Avoiding these issues does not solve the challenges of housing that continue to affect the urban households currently,” HRT added.