My hands are clean: Mavhinga 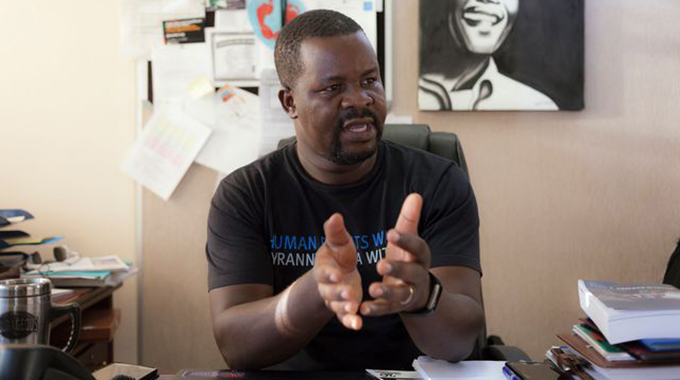 Herald Reporter
Human rights lawyer and political activist Mr Dewa Mavhinga has distanced himself from any attempts at regime change in Zimbabwe, saying he was a law-abiding citizen with no such intentions.

Mr Mavhinga who is the Southern African director for Human Rights Watch said allegations that he was involved in attempts to topple the Government were false.

The statement by Mr Mavhinga followed a story by The Herald a fortnight ago based on a leaked Whatsapp chat between fugitive former Cabinet minister Walter Mzembi and South African-based businessman, Mr Mutumwa Mawere in which the duo discussed several strategies to salvage their waning fortunes.

In the chats which went viral, one of the suggestions made by Mr Mzembi was to call for regime change in Zimbabwe adding that Government must compensate Mr Mawere for the loss of his business entities as a pre-condition for removing sanctions by the United States.

The duo also proposed to rope in political activist, Ms Miriam Mutizwa and an individual they identified as Dewa whom they described as key in engaging the international community such as the United States and the European Union on Zimbabwe.

“I have been going through the information you sent. My summary is a regime change in Harare is part of the solution if not the ultimate solution . . . We have to place your issue before the USA in a manner where it becomes topical politically and linked to removal of sanctions. Equally EU. So Dhewa will be key if we package it properly,” said Mr Mzembi.

But in a new turn of events, Mr Mavhinga, speaking through his lawyer, Mr Mose Mackenzie-Ndebele of Zimudzi and Associates vehemently denied any involvement of a plot to topple the Government.

Mr Mavhinga accused The Herald of being malicious through writing an article that he said was defamatory.

“Our client has further advised us that the same article is false, not only in its contents, but that what your reporter depended on, an extract of an unverified chat purportedly between a one Mzembi and one Mawere, which chat does not mention the name Dewa Mavhinga at all. It was The Herald newspaper which maliciously inserted Dewa Mavhinga’s name into the chat and made wild allegations about our client’s purported involvement in an imaginary plot to oust the Government,” said Mr Mavhinga.