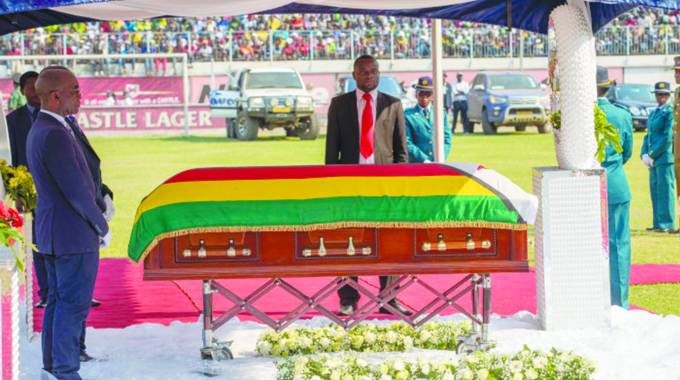 Although former President Robert Mugabe was buried last week, the story of his caskets has remained subject of much debate, adding  to the “controversy” surrounding his burial.

Many  believe his body was  changed into three caskets between his arrival in  Zimbabwe and burial.

A source who was in Singapore at the time of the death said there was nothing amiss on the change of the caskets.

“When the former President died in Singapore, a casket was secured and that is the wooden one which everyone saw at Rufaro Stadium and at the State Funeral held in the National Sports Stadium.

“The confusion was that when that wooden casket arrived at the airport, it was wrapped in a brown hessian cloth as it had been carried among luggage from Singapore and the covering was meant to ensure it does not get damaged. This is very normal,” said the source.

Adding: “Further, it should be distinguished that the body came on board a charted private plane, hence the decision to place it in a casket.

If it was a commercial plane maybe it would have been placed in the traditional air tray, which is a wood-bottom tray with a lid made of a wooden board.

“When the body arrived at the airport, it was taken to One Commando Barracks where the hessian cloth was removed before the exposed brown wooden casket with independent side and front flap handles was taken to Cde Mugabe’s Borrowdale Brooke home.

“Everyone will agree that the programme from Wednesday to Saturday was packed and there had not been solid confirmation of the burial place, hence the continued use of the wooden casket.

“It was only placed into another casket on Monday morning by Doves undertakers before going to Zvimba.

“The casket that was in Zvimba is the same whose pictures circulated in the media when Julius Malema came. It is also the same that the former President has been buried in.”

In a terse statement after a church service for the late leader and before his burial, family spokesperson Mr Walter Chidhakwa said: “The journalists, we thank you for being here with us.

“Tell your story the way you want to tell it, but we are confident that that which we did will never be tainted by a wrong interpretation of the story.”

According to national handling services, the process of preparing a body for a flight, in non-exceptional cases — is relatively straightforward.

It must be double-wrapped in a plastic, then packed into an air tray filled with cooling gel packs.

Typically, caskets are not used because there are high chances they might get damaged since they will be among other cargo during travel.

Aviation sources say caskets or coffins are usually provided by the funeral home on the receiving end of the flight.

The former President was buried in a centimetre-thick copper and steel, square-cornered casket.

The coffin also came with a 5mm thick inside glass compartment and airtight gasket, presumably meant to preserve the body.

The Sunday Mail can reveal that the casket arrived into the country well before his death and has been in the custody of Doves Funeral Services, which at one time  kept it —locked — at its Harare Street and Kwame Nkrumah parlour.

According to sources, the automotive paint finish — with three layers of clear coat casket — is fitted with handles secured by inside reinforced metal strips.

It came with a three-way adjustable bed frame and mattress for both tilt and height adjustments.

The casket’s interiors also include a 100 per cent polyester cushioning and pillow.

A further search of similar caskets online showed that they are usually given a continuous welded bottom, including joints.

It is also fitted with a polypropylene-injected moulded gasket to ensure air tightness once closed.

The airtight casket keeps away insects, air or water and allows the body to decompose naturally.

Mystery, however, surrounds the whereabouts of the wooden casket that the body of the former revolutionary icon came in from Singapore.