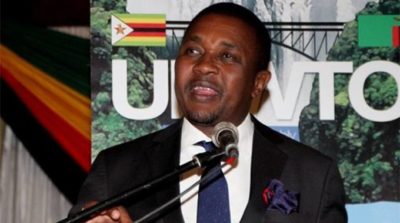 The two said they have left the party under the leadership of interim secretary general Lloyd Msipa, who joined the party after quitting President Emmerson Mnangagwa’s Zanu PF.

In a letter they both signed on Wednesday, Mzembi and the former Higher Education deputy minister said the People’s Party was formed to facilitate a democratic change in Zimbabwe but internal contributions have stood in its way and thus the decision to quit.

“Having failed to resolve internal contradictions that have recently bedevilled the People’s Party, we have reached a decision together with my deputy, Dr Godfrey Gandawa, to step down from our positions in the interest of the party,” the statement partly reads.

“The party was started with the sole objective of facilitating democratic change in Zimbabwe and that sacrosanct goal remains bigger than any individual, including those occupying the presidency.

“In that vein, we have decided to hand over control of the party to secretary general Lloyd Msipa. We wish the party good success in its democratic endeavour.”

The People’s Party was formed last year by mostly members of the vanquished G40 faction who are now fugitives in South Africa after fleeing the country in the aftermath of the November 2017 military coup that toppled the late former President Robert Mugabe.

Before Mzembi’s resignation, Msipa had announced the sacking of treasurer general, Agrippa Masiyakurima, accusing him of hijacking the party to form an alliance with exiled former Local Government minister Saviour Kasukuwere, who fronts the Tyson Wabantu Movement.

But Masiyakurima refused to back down and instead announced a counter suspension of Msipa, whom he accused of tribalism, among others.

Mzembi and Gandawa’s resignations follows a week of public brawls between party members.

There have been accusations that Msipa was working with Zanu PF, plotting to tie the two former ministers to terrorism charges, a move that could also see them being deported from their safe haven.

Masiyakurima further built on the accusations in a series of tweets attacking Msipa.