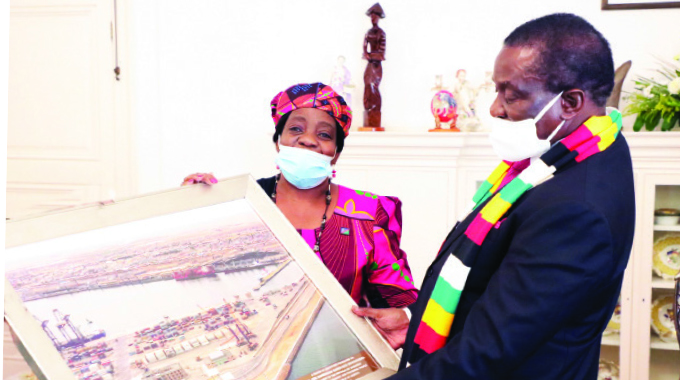 Ms Pienaar made a farewell call on President Mnangagwa at State House.

The two held a closed-door discussion on the continued strong bilateral relations between the two countries which she said have grown from strength-to-strength.

Ms Pienaar said her seven-year tour of duty in the country was productive and achieved several milestones.

“During my tenure we have further strengthened our relations at all levels at business, social, cultural and at the level of tourism and people-to-people interaction,” she said.

“We are one people. During my tenure we achieved a lot of milestones and lessons which am taking back home.”

She said the most significant achievement during her tenure was the decision taken by President Mnangagwa and his counterpart Hage Geingob to elevate the two countries’ Joint Permanent Commission to a level of Bi-National Commission.

During a Joint Permanent Commission on Cooperation held in Namibia last year President Mnangagwa and President Geingob agreed that the inaugural session of the Zimbabwean-Namibia Bi-National Commission would be held in 2021 after the two brothers endorsed a proposal to upgrade Harare and Windhoek bilateral relations from a JPCC.

Zimbabwe and Namibia set up a JPCC in 1992 aimed at fostering economic cooperation.

The Bi-National Commission is a vehicle of cooperation that is expected to oil bilateral relations between Harare and Windhoek.

“It is truly an achievement that demonstrates that our political relations are solid, were cemented and it has taken us to that level to further strengthen our trade relations,” said Ms Pienaar.

She also cited the setting up of a dry port by Zimbabwe as another important milestone.

The dry port was officially commissioned by President Mnangagwa during his State visit last year in Namibia. During her tenure, Ms Pienaar also successfully recorded outstanding achievement in the twinning agreement signed between the two provinces in Zimbabwe and two regions in Namibia.

A Memorandum of Understanding signed between Mashonaland West province with Kavango East region of Namibia, two years ago which is now bearing fruit, with Namibia now sending students to Chinhoyi University of Technology.

The twinning arrangement has seen cooperation between the two regions in areas such as agriculture, education, tourism, environment and business best practices.

Farmers in Kavango East region are interested in maize seed from Seed Co.

Namibians had also shown a keen interest in CUT’s artificial insemination programme as they are also into livestock production.

The two countries also had a successful twinning Matabeleland North and Omaheke Region focused on encouraging activities that can boost people’s livelihoods.

“My stay in Zimbabwe was a memorable one I am living behind a lot of achievements which are collective,” said Ms Pienaar on a parting shot.