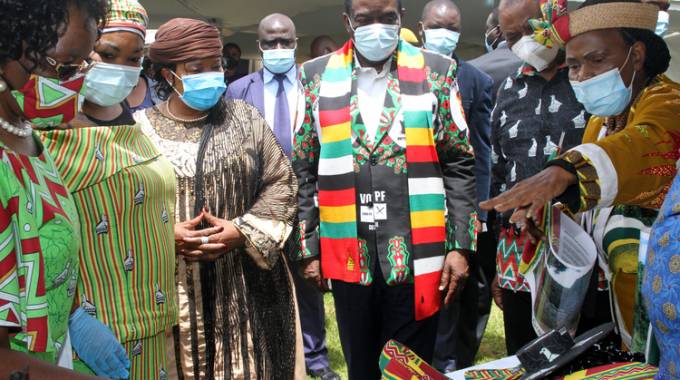 PRESIDENT Mnangagwa yesterday launched the National Dress Fabric at a colourful event at State House, marking the first time that the country has been able to settle on a national dress style since 1980.

First Lady Amai Auxillia Mnangagwa spearheaded the search for the National Dress Fabric after embarking on comprehensive consultations with different stakeholders and ethnic groups from all the country’s 10 provinces.

The National Dress Fabric encompasses national symbols such as the Zimbabwe Bird, the National Flag and the Chevron pattern. Designs of the fabric were showcased at a glamorous fashion show held at State House.

Speaking after launching the National Dress Fabric, President Mnangagwa lauded the First Lady for leading the milestone achievement that is crucial to promoting and preserving national identity.

He said the National Dress Fabric promotes unity among Zimbabweans, in light of Unity Day, which will be commemorated on Tuesday.

“The fabric plays an important role in the preservation of national values and cultural heritage and helps create unity among our people. I challenge the citizenry to conceptualise our apparel as more than just a form of identity. It must be a bridge, joining communities with the uniqueness of their heritage, more so that this launch is happening two days before our country commemorates Unite Day.”

The President said the National Dress Fabric will contribute to convey Zimbabwe’s culture, ways of life, values and belief systems.

“I am enthused that fashion and design now plays an equally important role with other artistic fields in our national development discourse. I therefore want to appreciate all the fashion designers and stakeholders in the textile industry for this achievement,” President Mnangagwa said.

He said the Government would set aside days when people would wear the fabric.

“Going forward, as Zimbabweans, both here and in the Diaspora, let us now promote our country’s sovereignty and national identity through this National Dress Fabric. On our side as Government, we should designate days when our people wear attire with the National Dress Fabric, inclusive of those in the education sector,” President Mnangagwa said.

The President implored the media to popularise the National Dress Fabric while encouraging the fashion and arts sectors to do the same.

“In addition, the Zimbabwe Fashion and Textile Industry and Creative Industry are challenged to draw inspiration from this national fabric by blending the designs into contemporary fashion, art, film and music trends. This will ensure that the National Dress Fabric is immortalised and passed on to the next generations.”

In her remarks, the First Lady said she intended the National Dress Fabric to depict the country’s traditions, history, national heritage and aspirations while being appropriate to all social and religious gatherings.

In addition, the fabric had to embrace all ethnic groups and historic backgrounds.

The First Lady said she decided to take up the initiative to come up with a National Dress Fabric as many Zimbabweans had no idea of what to wear during national events, leading many to adopt foreign styles.

“I considered countries like South Africa and Malaysia with complex cultures but had national dresses and I said Zimbabwe with its more unified culture should find it easier to have one of its own. As a woman, in my own mind, I thought of a national dress for Zimbabwe which included a wraparound cloth, headdress and ornaments, including necklaces, earrings and bracelets. But I decided to consult with experts on how to go about it,” she said.

The First Lady assigned the Minister of Women Affairs, Community, Small and Medium Enterprises Development, Dr Sithembiso Nyoni, to oversee the work for her.

“I would like to take this opportunity to appreciate the work that has been put in by Honourable (Sithembiso) Nyoni and her ministry, King Fisher, the Fabric Designer, fashion designers and the multi-stakeholders who have been critical in ensuring that this process comes to fruition and that Zimbabwe can finally launch a national dress.

“Today, we witness the launch of the National Dress Fabric as well as the fashion show where various designs of the national fabric are on display. We also look at the way this fabric can be designed so that it aligns well with the drive to instil nationalism among Zimbabweans near and far. We want to encourage all Zimbabweans to fully engage and participate in the promotion and popularisation of the national dress and national fabric,” Amai Mnangagwa said.

While the initial search for the National Dress Fabric started in 2005, it did not yield any results prompting Amai Mnangagwa to take it upon herself to ensure the programme succeeds.

Yesterday, the President and First Lady toured stands where the fabric was being exhibited in different designs.