Ndewere case: Another judge recuses self 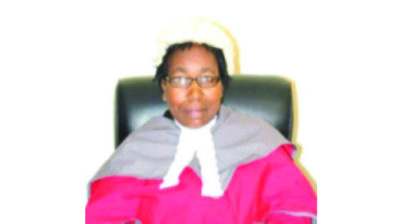 Justice Ndewere brought to the court an urgent chamber application seeking to interdict President Mnangagwa from setting up a tribunal to investigate the question of her removal from office in terms of the Constitution, which has since been done before the hearing of the judge’s application.

She sought that the Judicial Service Commission’s decision to advise the President to set up a tribunal to enquire into the question of whether she should be removed as a judge or not, should be declared unlawful and be set aside.

Justice Ndewere argued that the complaints raised against her should initially have been dealt with in terms of the JSC code of ethics before resorting to the procedure set out in the Constitution for removal of a judge from office.

Following a request for him to recuse himself, Justice Chikowero found merit in the request on the grounds that he sat on the High Court bench together with the suspended judge and both were stationed in Harare.

“She is my colleague,” he said. “She is the senior judge and am the junior judge.”

Justice Chikowero, who was appointed to the bench December 2017, said since then, he had always been paired with Justice Ndewere on the urgent duty judge roster.

This, he said, meant the suspended judge had been his professional partner on that roster ever since he became a judge of the High Court.

“Professionally, I am therefore closely linked to the applicant (Justice Ndewere),” he said.

To this end, Justice Chikowero said judicial office was a public trust and expressed the view that his continued sitting in the matter would not maintain public confidence in the judiciary.

“It would actually be an embarrassment to the judiciary,” he said. “It would bring the judiciary into disrepute. Whatever my decision in the matter, justice would not be seen to have been done. In the result, I recuse myself from presiding over this matter.”

Justice Foroma said he was in the same criminal division as the troubled judge.

He stated that judges in the same division interact closely with each other in a number of collaborative respects.

He felt there was need to maintain collegiality amongst judges to avoid perceptions in the public domain and that it would be in the best interests of justice.

Justice Ndewere is being accused of conduct inconsistent with a judicial officer, reportedly for slipshod work and a large batch of delayed judgments.