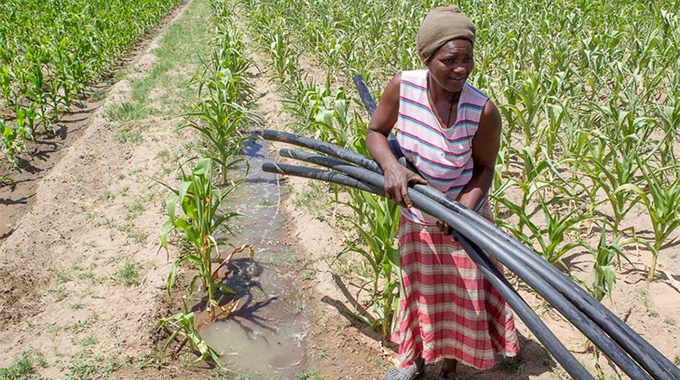 Irrigation has the potential to transform rural communities

Lovemore Chikova
Development Dialogue
The recently launched National Development Strategy 1 (NDS1) that will run from 2021 to 2025 provides an opportunity for the development of rural areas, which have been lagging behind in various aspects.

This is because the development blueprint recognises the importance of devolution in the attainment of Vision 2030, primarily aimed at achieving an upper middle income economy.

But the vision cannot be complete without the involvement of the rural areas, where the majority live.

While the devolution concept will be applied to all the provinces, it is the eight rural provinces that stand to gain more from the initiative because they have been lagging behind in various ways.

Devolution is provided for in Chapter 14 of the Constitution, with its main goal being the equitable allocation of national resources and the participation of local communities in the determination of development priorities within their areas.

It entails that provinces should have economic and social indicators to track their development in terms of productivity, employment creation, export earnings and import substitution initiatives as part of the periodic provincial reports and briefs they present.

The concept of devolution provides a three tier government system at central level, provincial level and local level, coming with the empowering of people to make economic decisions at the various levels of governance.

It is important to re-emphasise that devolution does not make Zimbabwe a federal State, but will ensure the country continues to maintain its unitary State system.

This means that central Government will make a decision on which powers to devolve to the lower levels, and in the case of Zimbabwe, Government is giving local councils and provinces the mandate to make decisions on developmental issues.

According to the Constitution, the desire is also to ensure “the equitable allocation of national resources and the participation of local communities in the determination of development priorities within their areas”.

It is then refreshing when an important economic policy like the NDS1 launched by President Mnangagwa recently and the 2021 National Budget presented by Finance and Economic Development Professor Mthuli Ncube last week recognise the importance of devolution.

Both developmental blueprints seek to advance the implementation of devolution.

In 2019, Prof Ncube availed $703 million in the National Budget towards devolution, while the figure increased to $2,9 billion in this year’s budget.

In the 2021 Budget, the allocation for devolution was increased to $19,5 billion, indicating the serious approach to the developmental concept.

On the other hand, the NDS1 is unequivocal in its support of the devolution concept, to the extent of devoting a whole chapter specifically outlying what will be done.

NDS1 makes it clear that devolution “signifies a new way of governance in the Second Republic where decentralisation is a key feature and strategy for non-discriminatory and just governance, as well as inclusive and transformative socio-economic development”.

The economic blueprint will seek to address gaps noted so far in the implementation of devolution.

There will be capacitation in the areas of policy making, enabling legal and regulatory framework, spatial development planning, land surveying and Geographic Information System (GIS).

The other areas are engineering and analysis of local services value chains, designing correct cost recovery systems for delivered services and conducting baseline surveys and analysis of data.

The NDS1 mentions many other important actions to be taken to push forward devolution.

But practically for rural areas, the NDS1 strategies should be cascaded to addressing specific issues with regards to the development of the marginalised areas.

The NDS1 should address problems in the following areas when it comes to pushing for the success of devolution:

Many rural areas in Zimbabwe have poor transport network systems, yet an efficient transport system has the potential to transform such areas by widening access to markets, facilitating easy movement of people and goods and helping integrate rural areas with urban areas.

An efficient transportation system for the rural areas can play an important role in the movement of raw materials to the industries that are expected to sprout at centres across the country as a result of devolution.

The movement of goods and raw materials to the rural areas has always been limited because of poor roads and the poor modes of transport, while a modernised transportation system in rural areas enhances access to schools, health facilities and markets.

There are quite a number of social, political, economic and environmental benefits that accrue when energy is taken as a necessity for rural development.

Rural energy has a positive impact on other aspects of rural development such as education, agriculture and health.

The provision of energy fits well into the broader development of rural areas in line with the provisions of the Sustainable Development Goals (SDGs).

The upgrading of school and health centres in rural areas cannot be complete without an efficient supply of energy which enhances the use of new technologies.

Rural areas will need a healthy population to ensure people can participate in developmental programmes and projects that will be opened up through devolution.

There should be deliberate investment policies into the rural health sector, while health benefit schemes should be considered to ensure access to health provisions.

ICT comes with various socio-economic benefits, and this will be particularly more noticeable in the rural areas where access has been a preserve of those with the means.

In rural development, the use of ICT brings benefits across the board, including in agriculture, education, health, general economic development and tourism.

It is important that those driving the devolution process and the NDS1 consider rural development with much reference to agriculture, which provides the basis of the livelihoods for rural folk.

Modernisation of agriculture should be a must for maximum production at household levels and for small-scale commercial farmers dotted across the country.

Issues like lack of access to land, poor transport systems, lack of modern technologies, no reliable markets, lack of water and poor farming skills need to be attended to through provisions of the NDS1.

Rural tourism is a “low hanging fruit” that can yield results for the development of rural areas if it is well-planned and prioritised.

For instance, the development of rural tourism can bring with it vast opportunities in the improvement of infrastructure, as tourists would need good roads, excellent cellphone networks, the internet and many other provisions.

Improvement of tourism will result in the creation of employment, especially for the youths and women who reside in the rural areas, thus curtailing rural to urban migration which has been putting pressure on resources in urban areas.

A whole lot of infrastructure like hotels, lodges and safari sights can be developed in the rural areas as a result of tourism.