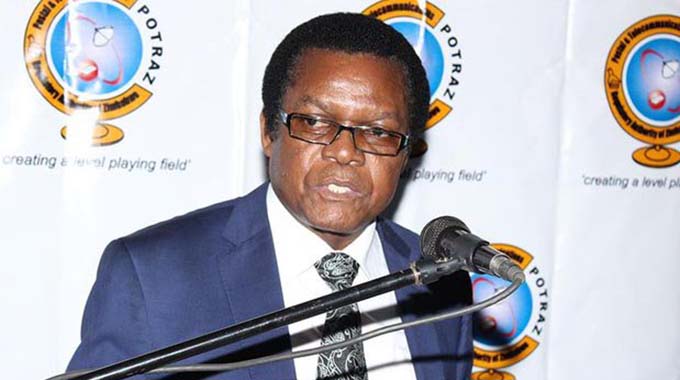 Zvamaida Murwira recently in Kadoma
The Post and Regulatory Authority fined NetOne last month for misrepresenting information to its subscribers as the authority vowed that there are no sacred cows when it comes to the enforcement of telecommunication compliance, legislators have heard.

POTRAZ director general Dr Gift Machengete said the fine imposed against NetOne put paid to the notion from some quarters that the mobile service provider was getting preferential treatment because it was a Government owned entity.

Dr Machengete said this in Kadoma at the weekend while addressing legislators during a workshop aimed at making lawmakers familiarise themselves with Potraz operations.

“We have not treated NetOne with kid gloves as widely perceived. In fact, only last month (November) we found NetOne guilty of misrepresenting subscriber information and levied a penalty of 5 percent of their gross revenue for August 2018,” said Dr Machengete.

“NetOne together with Econet and Telecel have received similar penalties in the past over quality of service breaches.”

Dr Machengete did not, however, disclose how much the fine was. He said the directive to have mobile operators share infrastructure was not in any way meant to undermine one of the operators in which it had invested heavily.

“Looked at objectively, that is not the case. The fact of the matter is that infrastructure will not be shared for free. Operators who put up their active equipment on towers belonging to another operator would have to pay rentals at market rates,” said Dr Machengete.

He said there was need to expeditiously gazette cyber related legal instrument to curb the vice.

“The 2017 International Telecommunication Union cyber security assessment report ranked Zimbabwe 113 out of 176 countries on the Global Cybersecurity Index, which means we are really not safe. We therefore need to accelerate the gazetting of the National Cyber crime and Cybersecurity Bill to mitigate security risks and cyber crime related threats,” said Dr Machengete.

Mr Hwende said ICT was the one of the panacea of the success of Government’s economic blueprint Zim-Asset.

In his keynote address, ICT Postal and Courier services Minister Kazembe Kazembe said ICT was integral in reviving the economy as well as the attainment of Vision 2030.

“The role of POTRAZ cannot be underestimated in this day and age where ICT is playing a great role in reviving the economy. President Mnangagwa’s ‘Vision 2030’ is possible because it is driven by ICT,” said Minister Kazembe.