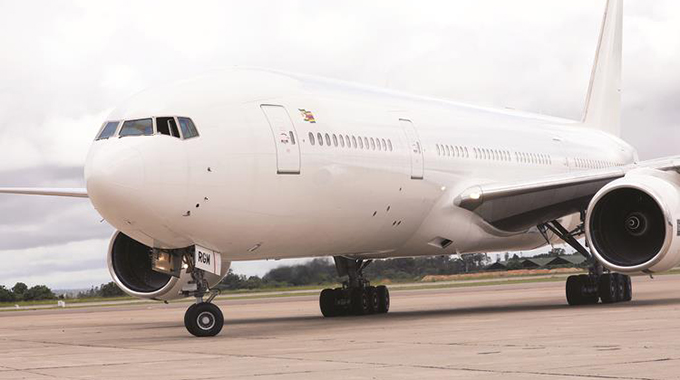 The acquisition of two aircraft by the Government for Air Zimbabwe (Airzim) can impact the horticultural and tourism sectors positively, spurring the sectors’ growth.

This week, the Government took delivery of the first of two Boeing 777-200ER aircraft from Malaysia.

The second is expected in a few weeks.

Essentially, the aircraft is expected to service the Harare-London, United Kingdom (UK), and Harare-Beijing/Guangzhou, China, routes.

The arrival of the aircraft coincides with the crisis engulfing South African Airways.

This development could result in more passengers in Southern Africa resorting to Airzim to link them directly with the United Kingdom, and from there with mainland Europe.

Regional passengers from, say, Malawi, Mozambique, Namibia and South Africa could find it easier travelling via Harare, when wishing to travel to the northern hemisphere or the Fast East.

This is in contrast with having to travel via Nairobi, Kenya, or Addis Ababa in Ethiopia and then into UK/Europe.

Tourists on Airzim will be able to experience Zimbabwean hospitality once they board the planes and not wait until they land in the country.

So the passenger and tourist traffic targets are an enormous opportunity that could be easily exploited if the airline prepares itself properly and adequately.

It will need to respect its flight schedules and banish a tradition of playing havoc with fare-paying passengers.

Airzim just needs to learn from the past that contributed to the airline’s negative performance.

But it is cause for concern that prior to the purchase of the aircraft and even ahead of taking delivery of the planes, a coherent business plan does not appear to be present.

The aircraft delivered this week should not be parked at the airport, awaiting formulation of a plan on how it is going to be deployed and the routes it will service.

It is possible that while the aircraft is parked at the airport, the Civil Aviation Authority of Zimbabwe (CAAZ) is charging Airzim parking fees.

It is costly to keep the plane grounded when it could already be flying and generating revenue.

The same scenario seems to be playing out at the National Railways of Zimbabwe (NRZ) where proposals and agreements for the acquisition of new equipment are being suggested without bringing in the business sector so that it can begin to prepare and align timelines for migrating movement of goods from the roads to the railways.

It is interesting that this apparent preparation deficit is affecting two parastatals under the same ministry.

The horticultural sector is the other low-hanging fruit which will provide cargo business for the national airline.

Zimbabwe is one of the four major exporters of horticultural produce on the continent.

Ethiopia, Kenya and South Africa are the other producers.

However, trade promotion bodies such as ZimTrade confirm that horticulture is one of the sectors poised for growth and that Zimbabwe is well-positioned to capitalise on seasons when the continent’s other producers experience low production volumes.

For the horticultural sector, there are opportunities beyond just exporting fresh produce.

These relate to value-addition, which would be conversion of raw materials into finished or semi-finished products such as fruit juices and dried or dehydrated products.

Value-addition in the sector would see more investment, leading to the creation of employment for locals.

These would have potential for increased foreign exchange inflows.

Zimbabwe has an edge over its competitors.

Growers are within an hour’s drive of the airport.

It has the land, a favourable climate, optimum conditions for production of a wide range of horticultural produce and a strategic location offering direct access to the UK and European markets.

Additionally, it has the cold chain infrastructure and capacity that used to serve the erstwhile national cargo carrier, Affretair, so well.

Previously, Airzim would land at London’s Gatwick Airport early in the morning, allowing enough time for the horticultural produce to be cleared and delivered straight to the market.

The same applied to business travellers.

They would arrive early in the morning and head straight for their meetings.

While Airzim works out its business and marketing strategy, following the recent aircraft acquisitions, it must engage players in the business, horticulture and tourism sectors, because the growth and sustainability of the airline’s business will depend on how it interacts and works with these sectors.