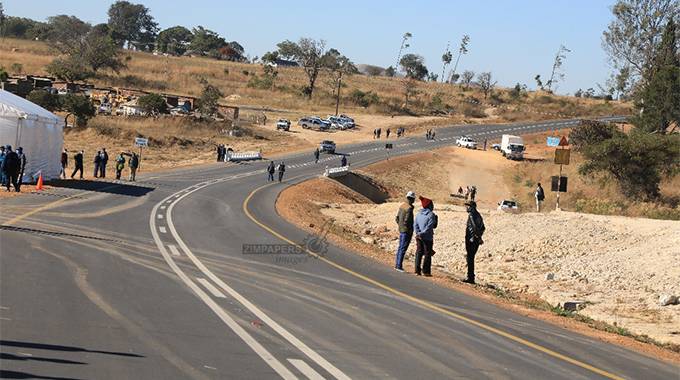 Picture shows the completion of Pembi River Bridge that links Mashonaland Central to the rest of the country. The bridge is a notable achievement which will have a positive impact on the accessibility of the area and enhance the safety of the road users.

Farirai Machivenyika in Mvurwi
Mashonaland Central is set to become the centre of economic activities following yesterday’s commissioning of the $16 million Pembi Bridge in Mvurwi by President Mnangagwa to boost road transport.

The commissioning set the tone for the province’s enhanced tapping into its rich mineral, agriculture and tourism resources in line with Vision 2030.

In a speech read on his behalf by Vice President Kembo Mohadi, President Mnangagwa stressed that the provision of modern infrastructure was essential in facilitating the country’s economic growth and drive to become a middle income economy.

The bridge and its road approaches was constructed from Government resources between August 2017 and September 2019 and links various districts in the province as well as other areas in the country.

“Modern and appropriate infrastructure remains a key enabler to accelerated economic growth and development as well as achievement of our National Vision 2030.

“Hence completion of this bridge is a notable impact on the accessibility of this area and enhance the safety of road users,” President Mnangagwa said.

The old bridge was a high accident spot with 47 accidents being experienced there in the past years.

The President said Government would continue prioritising allocation of resources for infrastructure projects with many roads and bridge construction ventures already underway in various areas across the country.

Such projects include the Mvurwi-Kanyemba road to speed up the development of a new town in Kanyemba and subsequent links to Zambia, Mozambique and the DRC.

The President also challenged various districts connected by the new bridge to use it for their development and improve the province’s GDP.

“You should never permit a situation where you are mere spectators to development. Be active participants.

“Rest assured that Government under my leadership will continue to facilitate an environment where you can succeed.

“The prosperity and achievement of higher standards of living for our people, no matter where they live, is important to my administration,” President Mnangagwa said.

Transport and Infrastructure Development Minister Joel Biggie Matiza said they were implementing various projects countrywide in line with the President’s vision saying such developments were necessary in reducing cost of production in the economy.