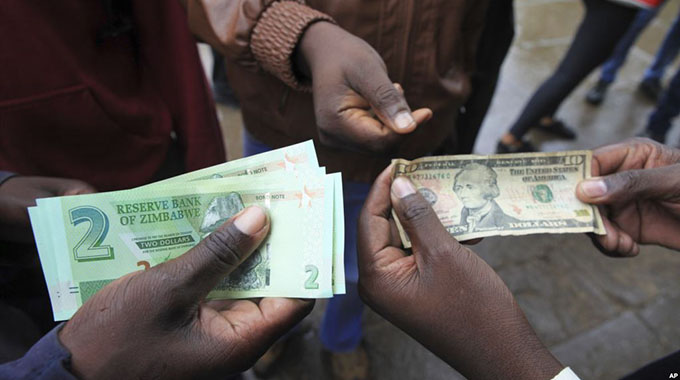 NEW foreign currency measures imposed by government last week are a timebomb that could lead to price increases, lower economic activity and herald a return to the hyperinflation era of yesteryear.

Government last week gazetted the new rules under Statutory Instrument (SI) 127 of 2021 seen as an attempt to curtail the galloping exchange rate on the parallel market and stabilise the local currency, but business leaders say its impact was akin to price controls and could lead to shortages.

“The SI, which was released in the market like a bomb recently, is a case of the so-called cat thrown among the pigeons. It has had the impact of shocking the market and destabilising the market as business woke up to its reality to their day-to-day business,” said Denford Mutashu, the president of the Confederation of Zimbabwe Retailers.

“As business, there is a huge worry that it seems too close uncomfortably to price controlling.”

He said dealing with those abusing the foreign currency system was long overdue, but government should have consulted widely before announcing the policy.

“Shops had been full and prices had nearly stabilised and we are currently at a position that could see some price increases and those fears have been confirmed by the current trend of huge price increases in the region of between 50% and 100%. I received messages from Manicaland (province), for example, and indications are that prices have been increased by shocking levels.”

Economist and businessman Prosper Chitambara told NewsDay yesterday that the effects of the new regulations were already being felt by consumers as business was already increasing prices of goods and services.

“The intention of SI 127 of 2021 might be noble in that its intention could be to bring sanity into the foreign exchange market, but the problem is that the market has not responded in favour of the statutory instrument, and businesses have already started increasing their prices in United States dollars, and in local currency,” he said.

“Government should have consulted the market players because the market is not responding favourable to the regulations and the effects will be felt heavily by consumers. It means that consumers’ welfare will be eroded and they will be the victims as prices will go up. There is now need for government to go back to the drawing board and consult the private sector, and I think that dialogue at this time is very critical.”

The Zimbabwe Coalition on Debt and Development (Zimcodd) yesterday said while it was commendable that the new regulations were meant to exercise strict monitoring of foreign currency recipients on the auction system, but described them as elitist, exclusionary in nature, and would likely perpetuate inequalities as it did not take into cognisance the economic realities experienced by ordinary Zimbabweans.

“The new regulations will further disadvantage the vulnerable and marginalised informal players who do not have access to cheap foreign currency, yet they need to restock their shops or purchase raw materials,” the economic watchdog said in a statement.

“To a greater extent, the move will negatively affect the informal economy which employs the majority of Zimbabweans,” it said.

In its analysis on the possible impact of the new regulations, Zimnat Asset Management said government was undoing all its good work in the past year.

“The government of Zimbabwe has over the last eight to nine months implemented good policies that have stabilised the local currency and have yielded positive results in taming inflation, as reflected by the deceleration of inflation during this period,” it said.

“We have also seen, over the last six months, a stabilisation of the parallel exchange rate, which we believe was also a function of the improved fiscal and monetary discipline, combined with a stable and improving economic policy environment.”

The new regulations may derail the economic gains and momentum achieved over the last nine months, the asset manager said.

“In our opinion, SI 127 of 2021 is too heavy-handed in its approach in stabilising the local currency and may do more damage than good to our already current fragile economy, which is still gasping from the after-effects of the COVID-19 pandemic,” it noted.

The new regulations could lead to an increase in United States dollar domestic inflation, a rise in demand for cheaper foreign goods, poor US dollar sales in the formal market that would also affect government’s foreign currency tax receipts and rising demand for foreign currency on the RBZ auction.

It could also lead to increased demand for the greenback on the parallel market, rising Zimdollar inflation and a decline in overall economic activity.

“We believe (the new regulations increase) the likelihood of another round of extreme hyperinflation, which may force economic agents to abandon the local currency indefinitely,” Zimnat said.

Former Finance minister and MDC Alliance vice-president Tendai Biti said the central bank had “chewed more than what it could swallow” by introducing the new rules.

“The RBZ is a rogue bank at the centre of arbitrage and rent-seeking extraction. However, in SI 127 of 2021 they have chewed more than they can swallow,” he said.

“The genie of hyperinflation has been let out of the bottle. More importantly, trust has completely crashed. This is the worst government in history.”

But the central bank insisted that the statutory instrument was meant to ensure that those obtaining foreign exchange from the auction system do not use parallel market rates.

“The use of parallel exchange rates of above 100, for example, on funds obtained from the auction at $85 to US$1 is not good for the economy and consumers. It is these anomalies or arbitrage opportunities that the SI is designed to deal with,” it said on its Twitter handle on Saturday.

“The SI is not designed to harm business, but to provide a level playing field for business and to protect consumers.”

“It is quite easy to stop this indiscipline, more so given that the Reserve Bank of Zimbabwe is the source of both local and foreign currency which feeds into the industry and commerce, partly through the auction system,” he said on Twitter.

“Anyway, the culprits are now known, including those in the telecommunications sector. Their wiles and subterfuges are also known. The key thing is to move in decisively, while relying on market-friendly instruments.  I can’t overemphasise discipline in the financial sector, including taking very drastic steps against errant banks which dabble in black market.”