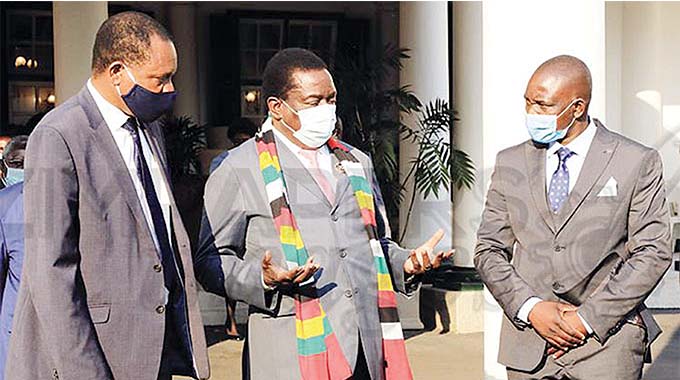 Harare Bureau
The newly appointed ministers, Dr Anxious Jongwe Masuka and Mr Soda Zhemu, who were sworn in at State House on August 18, pledged to improve the livelihoods of ordinary Zimbabweans through promoting value addition and import substitution.

They also made a commitment to increase production.

Dr Masuka, an agricultural technocrat, took over as Lands, Agriculture, Water and Rural Resettlement Minister following the death of Retired Air Chief Marshal Perrance Shiri last month, while Cde Zhemu, who is also Muzarabani North legislator, assumed his duties as Energy and Power Development Minister. Minister Zhemu took over from Fortune Chasi, who was relieved of his duties on August 13.

The new Cabinet ministers were sworn-in by President Mnangagwa at a function attended by Vice Presidents Constantino Chiwenga and Kembo Mohadi. In an interview soon after a closed-door meeting with President Mnangagwa, Dr Masuka said it was high time the country stops importing food, something that could be achieved through increased production. He said there was need to restore agriculture, which could help anchor economic transformation, as the backbone of the economy. His major thrust, he added, was to build on the successes already achieved in the sector.

“We are just coming up from a successful winter programme where we had an expanded wheat crop unprecedented in the past few seasons. So we can build on those successes and ensure that we start the preparation for the summer season now. The short-term and immediate objective is to ensure that we have increased production this season, but the overall scheme of things is that the broader strategy in pursuit of Vision 2030 is to make agriculture central again to the development of the country.

“There will be focus on food security, import substitution, diversified and expanded exports, value addition and beneficiation employment creation and improvement of rural livelihood in pursuit of that vision. We have hit the ground running. There is no option, people need to eat every day, and we cannot continue to import what we eat,” said Dr Masuka.

Minister Zhemu said his thrust was to push President Mnangagwa’s vision through ensuring that there was energy, which was central to the development of the economy across all sectors, is readily available.

“Obviously issues to do with electricity, energy and power are very critical. The President has enunciated the vision where we are looking at adequate and sustainable power generation. Obviously we will have to follow what has been put forward by the President in order to achieve the vision. I know certainly people are interested to know about issues about power because they are key enablers towards the achievement of Vision 2030. Talk of agriculture, mining, all the processes that we are looking at as a nation, power is a prerequisite. I will work harder to ensure that the vision is achieved but obviously it is a process,” said Minister Zhemu.

Zimbabwe, under the leadership of President Mnangagwa, is pursuing Vision 2030, which entails becoming an upper middle-income economy. Dr Masuka is a renowned technocrat, who has held several research and management posts.

He was formerly a lecturer at the University of Zimbabwe in the Department of Biological Sciences, as well as at the Zimbabwe College of Forestry. He has also worked at the Forestry Commission, the Tobacco Research Board, where he rose to general manager. Before his appointment he was the chief executive officer of the Zimbabwe Agricultural Society.

Dr Masuka has sat on over 30 boards and associations, and has been involved in consultancy work in agriculture, forestry, environment, public health and rural development in Zimbabwe, SADC and beyond. He is a founding fellow of the Zimbabwe Academy of Sciences in 2004. Minister Zhemu is a holder of a Masters in Business Administration and has a certificate in quality management systems.