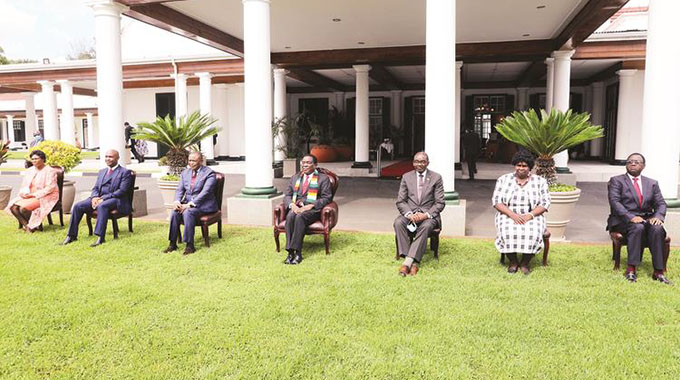 Zvamaida Murwira
Senior Reporter
NEWLY appointed ministers, who took their oaths of office yesterday at State House pledged to work towards achieving President Mnangagwa’s Vision 2030, for Zimbabwe to be an upper middle economy.

The new Foreign Affairs and International Trade Minister, Dr Fredrick Shava, was not among those who took oath as he will assume his post once his nomination as a Senator has been regularised.

In an interview soon after taking oath, Minister Mhona said his preoccupation would be to attend to roads and the general infrastructure that has suffered years of neglect from the MDC-run councils.

“We were blessed with  rains and we have another challenge that was addressed, that of food security. So our focus now as a nation is going to be on the roads. I am glad now to say we will now direct resources to manage the roads. I am happy that His Excellency, the President came with a brilliant idea of declaring the state of disaster for our roads, meaning we are now going to take over some of the roads that were under the purview of the local authorities so that we will manage from my office,” said Minister Mhona.

“As enunciated by the President, for Vision 2030 we need to work together. Ownership of the roads is for Zimbabweans, there will be no one to say the minister will do it alone. Let us take ownership on rebuilding our roads. This ministry requires visibility, we are going to manage the roads and above all unity is very important.”

Cde Paradza said he will make sure that the Media Practitioners Bill, which seeks to create a conducive regulatory environment, was enacted.

He hoped to work well with members of the media fraternity most of whom he interacted with before.

“Some of them I have trained them, some I have employed them, others I have worked with them, so it will be quite an easy terrain for me and I think we will work well with the fraternity. Our major project right now is the

Media Practitioners Bill which we are going to push so that we set the standards and ethics. We are also going to create within that Bill the Media Council so that we have co-regulation on our way to self-regulation,” said Cde Paradza.

Cde Matsikenyera said the focus was to take over projects left by the late Dr Gwaradzimba that include repairing infrastructure damaged by cyclones.

“There is a lot of infrastructure damaged by Cyclone Idai my predecessor has been working on and I will take over from where she left. I will also work hard to have investors bring money into Manicaland province,” said Cde Matsikenyere.