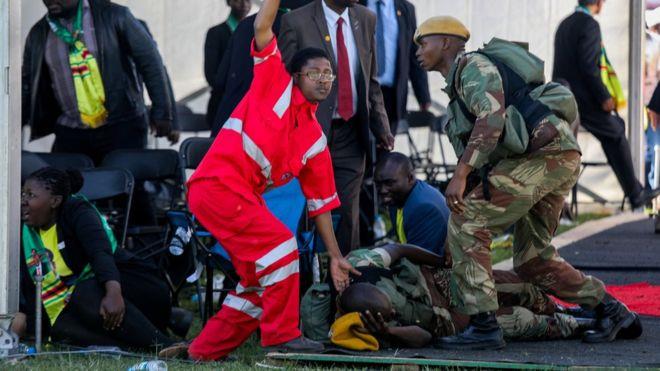 HARARE – In an interesting turn of events, and as concerns grow over the security of President Emmerson Mnangagwa, war veterans are putting pressure on Vice President Constantino Chiwenga — who is in charge of the country’s security cluster — to do more to protect both VIPs and ordinary Zimbabweans.

Speaking to the Daily News yesterday, the war veterans — who held an emergency meeting in Kadoma at the weekend, in the wake of the failed assassination of Mnangagwa in Bulawayo on June 23 — demanded that Chiwenga summarily sacks Mnangagwa’s close security aides who had also worked with ousted former leader Robert Mugabe.

This comes as opposition leader Nelson Chamisa yesterday opted to beef up his own trusted, private security — rather than rely on State security aides — saying that there was “too much factionalism” within the State security apparatus for it to be of use to him.

This follows Mnangagwa’s narrow escape from an apparent assassination a week ago, when an explosion rocked a Zanu PF rally that he was addressing at White City Stadium in Bulawayo — killing two security aides and injuring scores of other people.

The incident has since forced the government to introduce high tech security measures, including the use of drones at Mnangagwa rallies — as emotions continue to run high regarding the surprise bomb blast at a time that Zimbabwe has witnessed more peace than during previous elections.

The war veterans told the Daily News yesterday that Chiwenga should cut loose all of Mnangagwa’s close security aides who had also worked with Mugabe, as they did not trust such people.

“We resolved to take the matter with the vice president, who is in charge of State Security, to impress upon him that it will be expecting too much to think that people who worked with Mugabe for a long time can be loyal to the new president.

“So, we want them completely out, and new people should be appointed to take care of the president. We will also be very happy if they appoint war veterans in their places,” war veterans Mashonaland West chairperson Cornelius Muoni said.

Chiwenga, whose wife Marry, was injured in the horrific attack, is in charge of the security cluster which includes the Central Intelligence Organisation (CIO), the police and the military.

War veterans Mashonaland Central chairperson, Samuel Parirenyatwa, also claimed at the weekend that Mnangagwa’s security set up was compromised, calling for changes to be made before the elections are held.

“We are very worried as war veterans and as stockholders about what happened to our president, more so as it is not the first time that an attempt has been made on the life of the president … hence we need to make sure that this does not happen again.

“We would rather prefer ourselves as war veterans to be around the president to protect him, rather than having the youngsters around him who have proven to be incompetent,” the outspoken Parirenyatwa said.

Speaking in the wake of the assassination attempt on Mnangagwa, Chiwenga said the government would move to provide security to all presidential candidates if they needed it — a norm in many countries that do not promote partisan politics.

But Chamisa spurned the offer yesterday, saying although he felt vulnerable, he would instead increase his own trusted security, rather than rely on the State for his security.

MDC Alliance spokesperson Welshman Ncube said this was notwithstanding the fact that the State was “constitutionally obliged” to provide security to all the people who were at risk of attacks from whatever source.

“The State has an obligation to provide security where there is a risk from whatever source. However, it should be noted that the insecurity of some presidential candidates is something that is a product of the November 2017 coup.

“There is so much that is unknown and there is so much factionalism in the security sector that it is unwise to engage these people at the moment, even though they are well-trained.

Chamisa himself told MDC supporters in Victoria Falls recently that his rivals had allegedly set up a hit squad that was trailing him, and targeting his life.

On its part, the splinter MDC group led by Thokozani Khupe said the attempted assassination of Mnangagwa should force the government to provide them with security.

“We have all seen what happened in Bulawayo. If that could happen to the president, what about us who cannot afford to have intricate security around us?” Khupe’s deputy Obert Gutu said.

Independent presidential candidate Bryn Mteki also said the State should provide all the candidates for the top office with security, since any harm to any of the 23 could affect the elections.

“If ministers can have security, what more of a person who can become the president after July 30? For now, I have had to convert some of my music bouncers to become my security personnel ahead of the elections,” the artiste who is aiming for State House said.

At law, if a presidential candidate dies before polling, the polls will be postponed to allow the Nomination Court to seat again and go through the nomination process anew.

At the weekend, the government announced that it would introduce advanced security measures, including the use of drones at political rallies, to protect Mnangagwa and to secure the lives of all Zimbabweans.

In addition to using high-tech security measures, about 45 000 police officers would also undergo advanced security training ahead of the crunch July 30 national elections.

Mnangagwa escaped injury when an explosive device was detonated, as VIPs left the stage at a Zanu PF campaign rally at White City Stadium on June 23.

The device, suspected to be a hand grenade, went off moments after Mnangagwa had just stepped off the stage — seriously injuring one of his deputies Kembo Mohadi and senior Cabinet minister Oppah Muchinguri-Kashiri, as well as a host of other people.

Both Mohadi and Muchinguri-Kashiri were later airlifted to South Africa for specialist treatment.

Two security aides died early last week from the injuries that they sustained from the attack.

On Friday, police arrested two men for the attempted assassination of Mnangagwa. It was not clear if they had been cleared by the courts as was being suggested, as police spokesperson Charity Charamba said she did not know if they had been set free.

Mnangagwa, who has survived multiple attempts on his life, blamed the Bulawayo attack on the vanquished Generation 40 (G40) Zanu PF faction — which was involved in a war of attrition with him in the ruling party’s deadly succession wars.