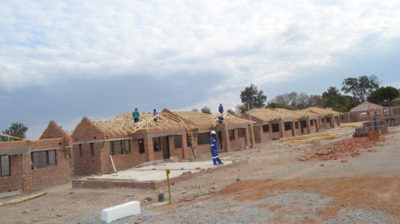 POKUGARA Property (Pvt) Ltd directors, who are involved in a land dispute with their business partner, George Katsimberis, have approached the High Court seeking an order dismissing Katsimberis’s application for an interdict in which he has sought an order barring the sale of stands by his former business partners.

It was Katsimberis’s argument that he is still a partner in the land developing business venture in which he claims he poured millions of United States dollars which he stands to lose if he is elbowed out.

But, in response to the interdict, one of Pokugara Properties’ directors, Tatiana Aleshina, who deposed to an opposing affidavit, urged the court to dismiss Katsimberis’s application on the basis that the latter has decided to bring back to court a matter that was already dealt with and completed by the High Court and the Supreme Court in 2018 and early this year respectively.

“In this matter the applicants (George Katsimberis and his firm) seek that the first to fifth respondents (Kenneth Raydon Sharpe, Castlehorpe Investments (Pvt) Ltd, Pokugara Ecofriendly Estates (Pvt) Ltd and Pokugara Properties (Pvt Ltd) be interdicted from selling any stands or subdivisions of a certain piece of land being Stand 19828 Harare Township of Salisbury Township Lands (measuring 20,8438 hectares) owned by the fifth respondent (Pokugara Properties),” Aleshina said in her affidavit.

“The applicants sought and failed to obtain the very same relief under cause HC 8943/18. In the aforementioned matter the applicants also applied to this court to have the first to fifth respondents interdicted from selling, disposing, alienating, transferring or dealing in Stand 19828 Harare Township of Salisbury Township Lands.”
Aleshina said Katsimberis’s petition under HC 8943/18 was lodged as an urgent chamber application which was later struck off the roll for being defective on multiple fronts and a written judgement to this effect was handed down on October 12, 2018 under Judgement number HH 649/18.

“The applicants thereafter lodged an appeal to the Supreme Court under cause SC 800/18 wherein they sought to overturn the aforementioned High Court determination. That appeal was dismissed with costs on February 4, 2020 after full argument,” she said.

“The applicants have therefore approached the wrong forum to obtain an interdict or any other action if they think they are so suited. If it is the applicants’ contention that the agreement between the parties is still effectual then this court is thereby obligated to give way to the dispute being resolved at arbitration as the parties expressly agreed,” she said. “As can be gleaned from the summons and declaration under HC 3810/20; the applicants have sought alternative relief in the form of a monetary claim of US$17 875 000 in lieu of their land claim. I hasten to bring to the courts attention that the total value of his purported costs can be deduced to be no more than US$883 728.48 for all 6 houses which applicant never built.

Aleshina further said Katsimberis’s application is defective in that he has again failed to properly cite and bring before the court, other interested parties in the matter such as Kilimanjaro Trust, The Porcupine Trust and the Hamster Trust.

“The interdict the applicants seek is incompetent at law; as well as being inimical to logic and sense. The applicants cannot seek that the first to fifth respondents be interdicted from selling any stands or land or subdivision of a certain piece of land called ‘Stand 19828 Harare Township’ as such description of land is no longer in existence,” she said.

Meanwhile, the Zimbabwe Independent would like to take the opportunity to set the record straight that Sharpe is not being sued for fraud as was reported in this paper’s issue dated August 28, 2020, as the matter is not criminal in nature, but a civil dispute. Rather, criminal proceedings are pending at the Harare Magistrates Court against Katsimberis who is accused of having used fraudulent building plans which led to the City of Harare demolishing an already built show house. Katsimberis’ criminal matter is pending.
The editor unreservedly apologises for the damage and inconvenience caused to Ken Sharpe, the shareholders and all stakeholders.