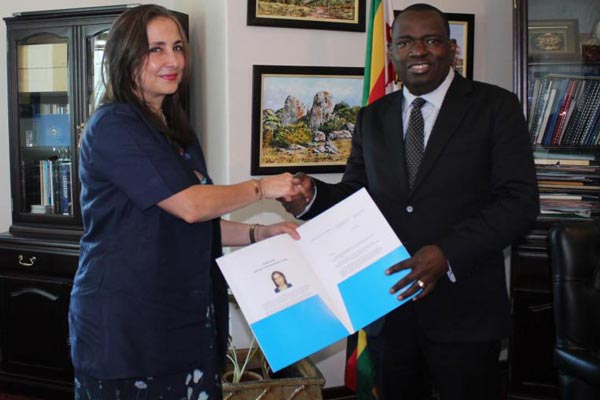 Ms. Moshiri will oversee the current five-year UNICEF Programme of Cooperation with the Government of Zimbabwe, 2016-2020.

Welcoming Ms. Moshiri to Zimbabwe, the Minister said that he looked forward to continuing to work closely with UNICEF to reduce child mortality and address health issues facing Zimbabweans. Ms. Moshiri, expressed appreciation to the Minister for receiving her accreditation within hours of arrival in the country, as this would enable her to assume leadership immediately of UNICEF’s collaboration with Government and partners in response to the country’s flood emergency.

A national of Iran, Ms. Moshiri started her UNICEF career in 1993 as a National Officer in Tehran working in various capacities, including Chief of Cluster on Child Survival and Development, before taking up her first international post in 2003.

Ms. Moshiri holds a Master’s degree in Epidemiology (MPH) and a Bachelor’s degree in Behavioural Sciences and Health Education, both from the School of Public Health at the University of California, Los Angeles (UCLA).