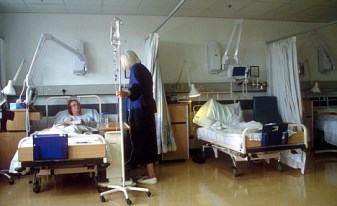 The anticipated opening of the Ekusileni Hospital in Bulawayo, a brainchild of the much-loved late Vice President Joshua Nkomo, has hit yet another snag after government failed to meet the project investor in India as had been scheduled.

This comes as the Indian investor, Sharda Group of Institutions (SGI), had started staff recruitments in preparation for the re-opening of the hospital.

However, Nyasha Masuka, the chairperson of the taskforce running the medical centre, said they had no idea when Ekusileni Hospital will open its doors to the public following its closure 15 years ago.
“We have not yet gone on the trip; we are not sure when we will be going. You can contact the permanent secretary for information,” he said.

Nkomo’s son, Sibangilizwe, said the family was in the dark about developments on the hospital.
“I have no information about the recruitments that are said to have been advertised in India.
“There has been no communication whatsoever about the project. For the past 17 years, this has just been an issue discussed in the press,” Nkomo told the Daily News.

Last year, he disclosed that government had turned down a potential South African investor, Clinix Health Group’s proposal, in favour of the Indian investor whose authenticity had not yet been verified.
Ekusileni specialist hospital was built in 2001 but shut down three years later after it was discovered that its acquired equipment, worth millions of dollars, was obsolete.

The hospital has been undergoing renovations over the past two years due to the damage on infrastructure caused by termites and dereliction.

Last year, President Emmerson Mnangagwa made a spirited commitment to open the specialist hospital before year end, pledging that he was going to make sure nothing would stand in the way of his efforts to bring fruition to Nkomo’s vision.

Finance minister Mthuli Ncube said the re-opening of the hospital was way behind of schedule.
According to Ncube, the hospital was supposed to have been running at the time set by Mnangagwa.
Government had said the hospital would be opened in two phases to be rolled in 2019 and 2020.
“Phase one of the operationalisation plan will begin in January 2019, targeting opening of the Accident and Emergency, Out Patients and Casualty Units, among others.

Phase two, targeting opening of Operating Theatres, High Dependency Unit, Intensive Care Units and Dialysis, among others is expected to commence in January 2020.
“This will be done under a joint venture arrangement between the National Social Security Authority (Nssa) and an identified private investor.

“The private investor will contribute medical equipment, and carry out renovations to the health facility, as well as provide the medical services and linkages with local medical personnel,” Ncube said last year.