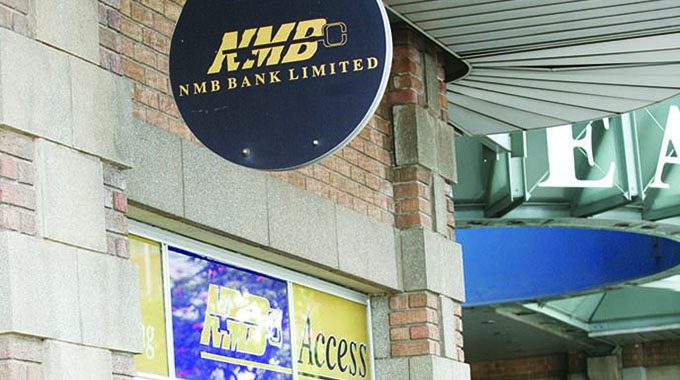 Michael Tome Business Reporter
NMB Bank Limited recorded a 56 percent decline in deposits in its 2019 financial year, a period under which the country slid into a hyper inflationary environment that stemmed from exchange rate liberisation in February last year.

The bank’s total deposits closed the year at $1,2 billion from $2,7 billion in comparison to December 2018.

Government on June 24, 2019, through Statutory Instrument 142 (SI 142) of 2019, discontinued the multi-currency regime, which had been in place since February 2009 and introduced the Zimbabwe Dollar (ZWL). The money was designated the country’s sole legal tender to be used for all local transactions and other purposes consequently leading to the speedy erosion of the newly introduced currency.

However, in the said period NMB recorded a solid financial performance despite a range of hiccups seen in the economy as total comprehensive income rose to $257 million (71 percent) from $95 million in 2018. The positive movement was attributable to a positive profit before tax which stood at $154 ,1 million.

Operating income before the impairments and monetary adjustments, grew to $439 million, (76 percent) up from $250 million in the prior comparable period.

These developments come on the backdrop of a slowdown in many sectors of the economy (in 2019) due to constrained capacity utilisation as enterprises experienced power outages, foreign currency deficiency and a hyper inflationary environment among other barriers.

In the period under review, the bank also recorded a 1,37 percent dip in Non-Performing Loans (NPL’s) mainly credited to aggressive collections and stricter credit underwriting standards.

The 1,37 percent was 3,63 percent below the Bank’s year-end target of 5 percent and six percent lower than the 7,43 percent recorded in December 2018.

Going forward, NMB has revealed that it will be broadening its services, diversifying into new market segments, which encompass embracing the unbanked bottom of the pyramid an initiative that might improve the bank’s deposits.

On the other end, the bank says it has set a ceiling for investment securities as it aims to direct more of its funds towards the productive sectors of the economy.

NMB did not declare a dividend for the period under review as the bank intends to meet the recently promulgated minimum regulatory capital requirement of local currency equivalent to US$30 million for a tier 1 bank by 31 December 2020 for its banking subsidiary.