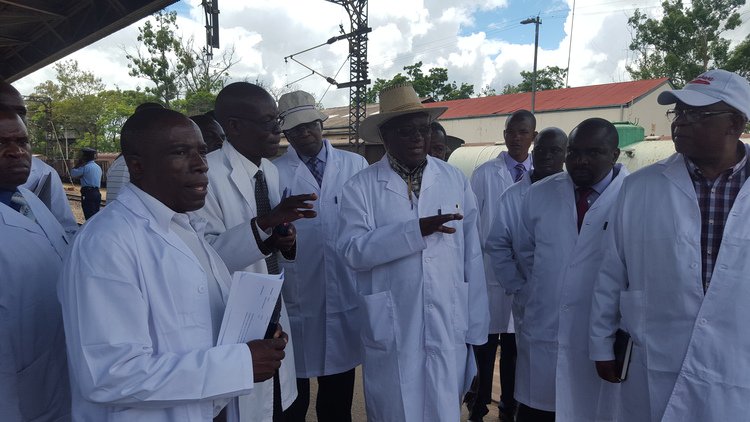 Business Reporter—
GOVERNMENT and a consortium led by the Diaspora Infrastructure Development Group (DIDG) and South Africa’s Transnet, have signed a framework of agreement as efforts to revive the National Railways of Zimbabwe (NRZ) gather momentum. DIDG/ Transnet, won the bid to invest $400 million into NRZ, a key parastatal that Government wants to revive in the near future.

Transport and Infrastructure Development Minister Dr Joram Gumbo yesterday told The Herald Business on the sidelines of a tour of NRZ’s infrastructure at the Harare Station that the deal is now at an advanced stage.

“We have now agreed on the ‘framework of agreement’. We now have it; they brought it to me and I have already signed it. What remains is to take it to Cabinet for analysis,” said Dr Gumbo. Cabinet resumes sitting on February 6 but the law allows Government officials spearheading projects of national importance to go ahead even before Cabinet analyses the framework of agreement.

Some of the issues addressed in the framework of agreement include what both parties – Government and DIDG/ Transnet – can do for each other; how payments will be made, how long the payments would be made and the rate of interest.

Said Dr Gumbo: “My coming here is to tell NRZ staffers that Transnet/ DIDG already have wagons and locomotives waiting to be taken to Zimbabwe because they are determined to ensure that work begins in earnest. I am assessing when they can bring the locomotives.” Dr Gumbo said the investors have agreed to bring 120 new wagons, 14 locomotives and 20 coaches in the next two weeks.

“These will be part of the $150 million that the investor has set aside for 24 mainline locomotives and 13 rail shunters or shunting locomotives,” he said. Dr Gumbo promised to fast-track the process to ensure the deal is sealed inside the first 100 days of the new administration led by President Emmerson Mnangagwa.

Currently, NRZ’s infrastructure is in bad shape, with the signal system being affected by the vandalism of copper wires, resulting in officials using word of mouth to communicate, in some cases. On some parts, the railway line is uneven, posing a danger to travellers.

Dr Gumbo said: “Everyone is aware that NRZ’s infrastructure has been in a bad state for a long time. NRZ is now unable to perform its functions – carrying passengers and agricultural produce and minerals as they used to do in the past.

“We have now come to a point where we are working for an investor to help us restore NRZ to its previous state. I have spoken with management on issues they have been raising with me through letters, and I have come here to see for myself on the ground.

“We are going to work with the DIDG/ Transnet and I decided to see for myself as minister responsible for the railway before the investors come.” Vandalism of copper wires on the signal system has forced NRZ to consider switching to a new method the does not employ copper wires. Similarly, the collapsing railway line on some stretches – which is caused by rotting wood – is set to see NRZ replace it with concrete because it is not readily available.

On Friday, he is expected to tour the Mutare workshops, Mutare stations, and ends the tour on Saturday when he tours the Nyazura, Rusape and Marondera stations. Resuscitating NRZ infrastructure has become critical now when Government is working towards reviving key industries such as Zisco and other mines that had either scaled down or mothballed operations due to economic challenges.